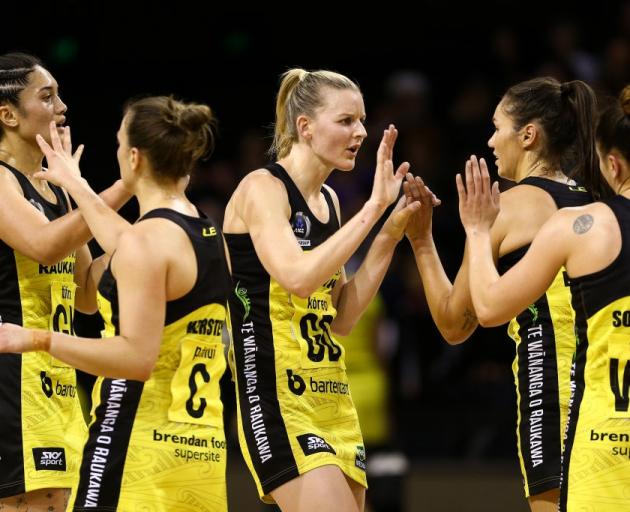 Central Pulse captain Katrina Rore (centre) is excited to get the ANZ Premiership season underway. Photo: Getty Images
In a normal season, New Zealand's elite domestic netball league should be close to crowning a champion by now - instead the revised ANZ Premiership is just getting started.

The 10-week competition picks up where it left off three months ago and despite re-working the draw a couple of times, the results from round one still stand, giving the Mystics, Pulse and Magic a headstart in the condensed competition.

Pulse captain Katrina Rore, who lifted the trophy last season, said she is looking forward to the contest.

"I think it's a bit surreal in the fact that our season would nearly be finished but now we are about to start and get into it," Rore said.

"We're just itching to get out there, it's been a long time and hopefully we can put a bit of joy on other people's faces when it can be on TV and people can finally come to games as well."

Games will be played out of a hub in Auckland for the first six weeks before fans in Invercargill, Dunedin, Christchurch, Wellington, Porirua and Hamilton can join in on the action.

For the Southern Steel it will mean weeks of chartered flights and playing two days in row before finally playing back in the South Island in August.

Steel midcourter Shannon Saunders said especially with double-headers it would be important for her team to be adaptable to make it through the season.

A couple of the teams are still missing players due to season-ending injuries and coaches were initially unhappy about the impact the short turnarounds in the rebooted competition would have on players.

Yvette McCausland-Durie, coach of the defending champion Pulse, said the changes to the competition meant she had to pay close attention to her squad's workload.

"With the double-headers that we haven't normally had in a Premiership that's made us think really hard about how we make sure that our roster is deep, that we've got variance in the roster and we've got the ability to change things up so I think that has been a really positive for us and certainly reminded us that we've got 10 very strong players who at any point don't weaken our line, they just add difference."

Physiotherapist Suzie Belcher who works for Netball Smart in the Netball Northern region said injuries would happen but with time away from the court, some players will be better prepared for this season.

"We expect there to be some risk of increased injury, but that said, if they are rotating their players more and actually the quarters are being shortened they are not massively overloading more than they would be normally.

"Certainly for some of our players this little bit of time where they've had time to just focus on thier bodies and their rehab and the personal things they need to do to try and improve themselves, actually some of them have come back in a better position."

Tonight the Mystics and Magic will showcase just how well the players have pulled up post-lockdown.

Mystics defender Sulu Fitzpatrick is a veteran of the competition and she said adrenaline would make up for any fitness deficiencies in the opening round.

"There might be an element of rust but the excitement is probably going to be a big thing, so the intensity I feel will be quite high given that it has been such a long build-up and with 12 minutes that's going to be actually quite good because I think the intensity will be able to be maintained for every game, so it will be a good tough competition."

Now it is game on to find the top sides before a triple-header finals day on 23 August will crown the eventual winner.