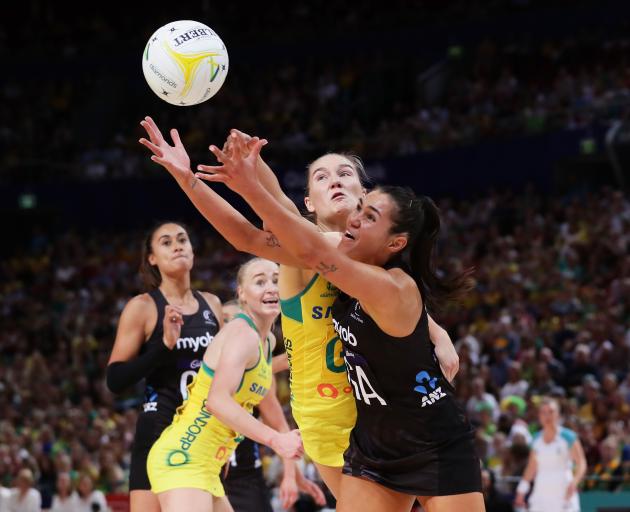 Ameliaranne Ekenasio of the Silver Ferns reaches for the ball under pressure from Courtney Bruce of Australia. Photo: Getty Images
The Silver Ferns are one step closer to gracing their trophy cabinet with the Constellation Cup.

Following a disappointing loss in Auckland earlier this week, the Silver Ferns hit back with a 54-53 win over the Australian Diamonds in Sydney to lead the series 2-1.

Should they carry their winning ways into the final test next weekend, the Silver Ferns will lift the Constellation Cup for the first time in seven years.

It initially looked like it was going to be the same story of a dominant Diamonds win on Australian soil, especially when they shot out to an early six-goal lead, which they held for most of the first half.

However, the Silver Ferns tore up the script, storming back in the third quarter, unwilling to go down without a fight - a response Ferns veteran Maria Folau described as "bloody great".

"We knew that the Diamonds were going to come out firing, it was tit for tat most of the second half," Folau said after the game. "Really proud of the efforts from the girls.

"We've still got one game in Perth, so we'll see how that goes."

The Diamonds had taken control of the match for the first and second quarters to lead at halftime by four goals. Australia's staunch defence shut down ball into the Ferns' circle, while captain Caitlin Bassett and Gretel Tippett led a restless attacking unit.

Clearly unhappy with their performance in the first half, Noeline Taurua's world champions hit back after the break with a stellar six-goal run to take the lead for the first time in the game.

Folau and Ameliaranne Ekenasio were forced to put their long-range shooting skills on display as the Diamonds defence continued to prove too niggly for the duo to create space under the post. But no strangers to the outer edge of the circle, the experienced duo confidently shot at a combined rate of 90 per cent.

Silver Ferns captain Laura Langman led her side from the front during a high-pressure final 10 minutes which saw the Diamonds hot on their heels.

Both sides looked momentarily unsettled as an array of missed passes and penalties saw possession thrown back and forth. However, it was the Ferns, again, who proved too strong in the do-or-die moments as Ekenasio slotted the crucial goal to give the Ferns the lead, and a Laura Langman intercept sealed the win.

The teams have a week to prepare for the final game of the Constellation Cup, set to be hosted in Perth next Sunday.