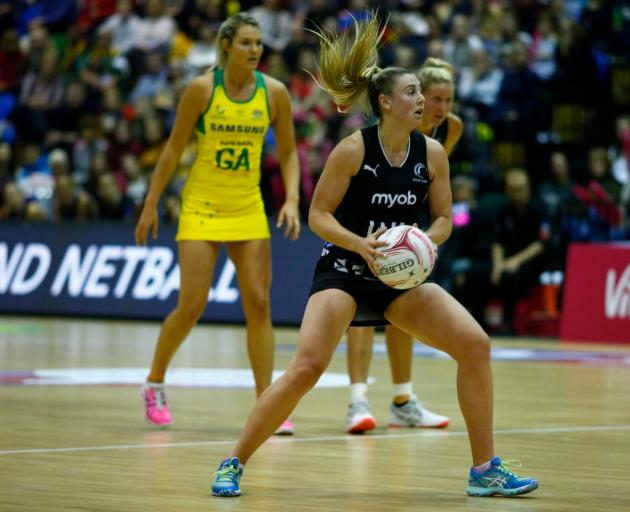 Silver Ferns captain Gina Crampton in action for the Silver Ferns against Australia. Photo: Getty Images
A 12-strong New Zealand netball team has been announced to represent their country at the 2022 Commonwealth Games in Birmingham.

Four athletes return for a second Games campaign including shooters Te Paea Selby-Rickit and Bailey Mes, and defender Kelly Jury, alongside midcourter Shannon Saunders who has been to three Commonwealth Games.

Silver Ferns coach Dame Noeline Taurua, who will guide the national side for the first time at a Commonwealth Games, said it was a privilege to name a team to compete at the pinnacle event.

"We are extremely proud to announce this group of athletes who have the opportunity to represent their country at the Commonwealth Games," she said.

"Being a part of the greater New Zealand team and being a part of some of the unique traditions at the Commonwealth Games will be a new experience for many of these players. We have a job to do in Birmingham but we're also looking forward to being a team within a team and to be a part of something big.

"To stand alongside New Zealand's top athletes from various sports is something special."

Taurua said the 12 players named in the New Zealand side had impressed over the last 18 months.

"We have monitored the progress these players have made during that time," she said.

"They have responded to what has been asked of them and delivered under pressure.

"I'm excited about the next few weeks as we complete our preparation and finally get on the plane to Birmingham after what has been a long build-up."

"Well done to the 12 athletes selected today to represent New Zealand and it's exciting to see such a strong team ready to get on the plane to Birmingham," she said.

"I wish the athletes all the best for the rest of their preparation, and we look forward to watching the side take on some of the best netballers in the Commonwealth."

The New Zealand team will continue preparations for the Commonwealth Games by competing in the Cadbury Netball Series next month and will depart for Birmingham on 21 July.