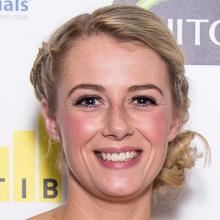 Blayze Rooney
It was the last week of round robin games in North Otago netball on Saturday.

St Kevin's A had a slow start against Waitaki Girls’ High School Wildfire and trailed 8-6 after the first quarter and at halftime was behind 17-14.

Megan Dodd came on at wing defence at halftime and made an immediate impact.

At three-quarter time St Kevin’s was down by two, but a strong team effort led by Annie Metcalfe saw St Kevin's take the game 28-24.

It was a rough day for a depleted Waitaki Wildfire side but it took it to the St Kevin’s side for threequarters of the match.

St Kevin’s put the foot down in the final quarter, running out a winner 28-24.

The best of the Wildfire side were Laura Dunshea and Charlotte Weir, with Weir picking up a number of intercepts. 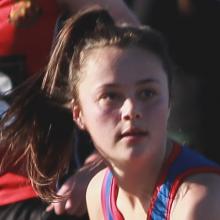 Megan Dodd
In a tightly contested game, Valley Koru ended up taking the game by one point against fellow club team Valley Karaka 43-42.

Each team led at different stages.

Brianna Weir and Kaylah Rawson worked hard in midcourt for Koru, while Sarah Newlands and Lisa Fenwick picked up precious ball in the defence end for Karaka.

Maheno Green showed up with a full team, dominating the court against fellow club side Maheno Rebels.

Rebels struggled to find connections mid court with wing defence Anika Smith collecting on too many unforced errors, while goal shoot Suzy Oakes was a standout in the shooting circle.

Standout player Blayze Rooney moved from midcourt to defence and her level head proved necessary controlling the midcourt, while Renee Webster had a strong game shooting.

A decimated Waitaki Girls’ Lightning Strike took on a strong Athletic Maroon team and there was a shuffling of bibs in order to field a team.

Next weekend the semifinals will pit Valley Karaka against St Kevin's A and Maheno Green will play Valley Koru.