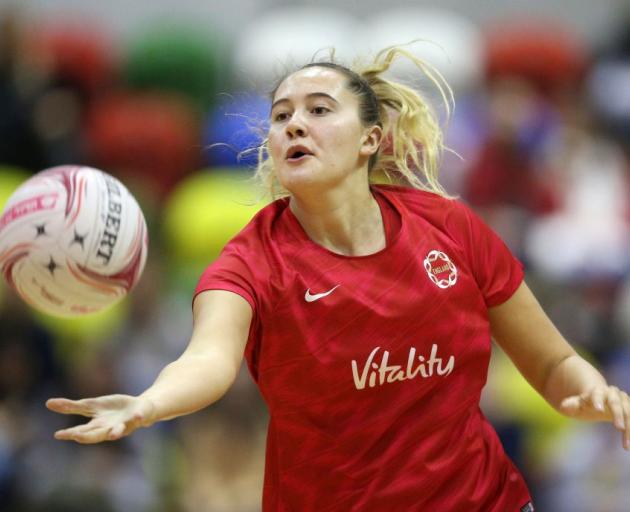 New Southern Steel shooter George Fisher will play for England in the upcoming series against the Silver Ferns. Photo: Getty Images
Southern Steel fans will receive a glimpse of their team’s new star signing next month.

George Fisher has been included in the England team to play the Silver Ferns in a three-match series.

She was one of 16 players named in a below-strength Roses side for matches in Hamilton.

The 1.88m goal shoot has signed with the Steel for next season, providing much needed cover in the shooting circle.

She will arrive with the team on October 8 and go through a two-week quarantine, before the series which begins on October 28.

The absentees from the squad may provide a bigger opportunity for Fisher as well.

Shooting duo Helen Housby and Jo Harten were both among the big names missing from the line-up.

That is due to their involvement in Australia’s Super Netball, which is not due to finish until October 18.

Coach Jess Thirlby said it was a massive opportunity for the squad.

"As you’ll see, we’ve got a great pool of talent heading out to face the Silver Ferns," she said.

"Some rising stars like Imogen Allison, who is yet to gain her first senior cap, plus some household names such as Serena Guthrie, who could achieve her 100th cap during the series, and Jade Clarke, who is the most capped England player.

"This is a great opportunity to blood some new talent in the lead-up to a home Commonwealth Games and for them to play alongside a number of Roses who have plenty of experience facing the Silver Ferns."