It was messy and it was disjointed.

In the end the Southern Steel did enough — just enough.

Kalifa McCollin scored a last-second goal for the Steel to claim a 38-37 win over the Northern Stars in its bottom four semifinal at the Super Club tournament in Nelson yesterday.

That result was made far harder than it needed to be.

Conversely, the Stars could look at it as one they had every opportunity to win.

Neither side could put the other away.

Every time one team gained turnover ball, it would turn it back over.

It took until the third quarter for the Steel to finally string together some consistency.

It established a four-goal buffer, which proved its key period of the game.

Little separated the teams early — neither entirely accurate, but also not letting the other get away.

Both took the lead and then lost it again as the quarter ended at 10-10.

A similar trend followed in the second.

Both teams had every chance to establish dominance, although neither took it.

Every time one side forced a mistake, the other would steal the ball back.

It took until late in the quarter for the Stars to finally take the chance to capitalise off a Jennifer O’Connell miss.

That gave them a 20-18 lead, which they quickly extended by another goal.

But that had soon evaporated, as the Steel pegged one back and than an O’Connell goal made it 21-21.

It remained even at halftime, as both sides added one more goal to their score.

That continued until the Steel finally managed a two-goal buffer midway through the third quarter.

After a held ball at the Stars attack end, Shannon Saunders threw a nice long pass to find O’Connell unmarked in the circle.

That soon became 30-26 as Kiana Pelasio poured in two goals back to back.

The Stars pulled that margin back one at the final break, and the Steel led 31-28.

O’Connell left with an ankle injury midway through the fourth quarter.

A run of three with four minutes left took the Stars to within one, before a contact call on Georgia Heffernan allowed the Stars to equalise.

However, Kalifa McCollin slotted a goal on the buzzer to get the Steel home.

The Steel will play the Mainland Tactix at 5pm today in the fifth-placed playoff. 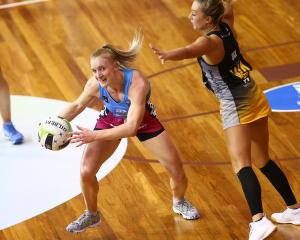 Steel strong in both defence and attack