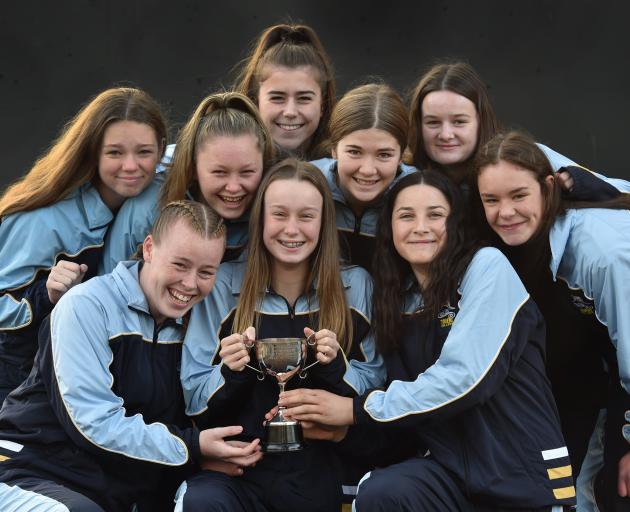 Co-coach Ang Beattie was thrilled with how well her girls performed at the tournament and was pleasantly surprised with what they achieved.

''We were actually really stoked to get third place last year, because we knew for a co-ed school to go to that kind of tournament and get top six is actually pretty high,'' she said.

''The thing with year 10, too, is that it's twice as hard and we knew a lot of speed and fitness would be required.

''When we won it, we were so shocked and over the moon.''

After coming third in the year 9 tournament, the Taieri College side came back for its final year as a full team to try to bag the top prize.

Having lost to St Margaret's College, of Christchurch, last year, which led to the third place, the Taieri side faced the same side again this year in the semifinals.

Taieri fought hard to turn the tables and came out on top with a six-goal win.

Beattie said it was a composed effort from the side to win the semifinal.

''The girls stayed composed and
St Margaret's got pressured and panicked and we managed to keep it all together. We had a lot of injuries and a bug was going around in the team during the tournament, so it certainly didn't come easy but the girls played so well, and did amazing.''

Beattie and her co-coach and sister Sally Thomson have coached the players from two to six years and both are sad to see them moving on into older age groups.

''Sally and I have coached them all for a long time and they are like 10 daughters to us, who are all great friends and it's like one big happy family.''

''We are sad to see the girls move on but we are having a trip to Queenstown soon, as a bit of a celebration, so it will be a good way to end a great year.''