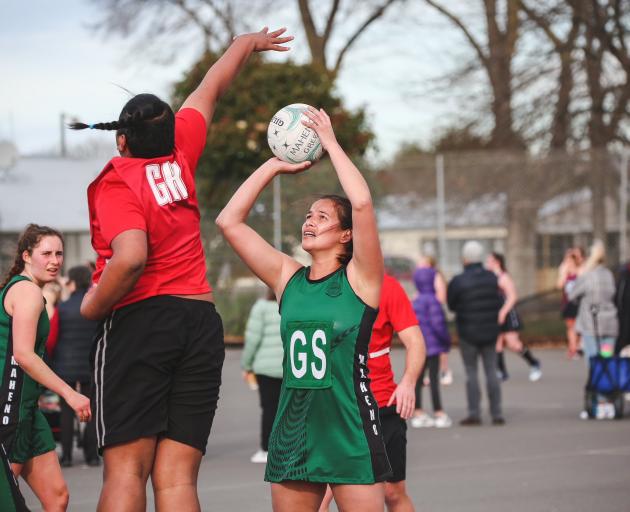 Maheno Green goal shoot Suzy Oakes is defended by Oamaru Men goal keep Andy Anderson during their premier netball match in Oamaru on Saturday. Anderson has been named as a training partner in the Dunedin men’s team to compete at the nationals. PHOTOS: REBECCA RYAN
A strong second half allowed Valley Karaka to pull away to a convincing win over Athletic Maroon.

It led by six at halftime, before running rampant to finish 43-22 winner in North Otago club netball on Saturday.

Brytnee Firman dominated at goal shoot, holding her space well and shooting at 80%.

She was supplied a steady stream of ball by Whitney Cleveland, who connected well and fed in some long balls from the centre third.

At the defensive end, India McLay provided strong drives through court and created turnover ball, being well backed up by Kara Cox.

Athletic did well to score off its turnover ball in the first half, defensive duo Robyn Williams and Blayze Rooney being their best on show.

The Oamaru Men took a while to settle into the game, but eventually formed strong connections to run out 45-24 winners over Maheno Green.

Maheno turned over some early ball to cause the Men problems, but struggled to capitalise. 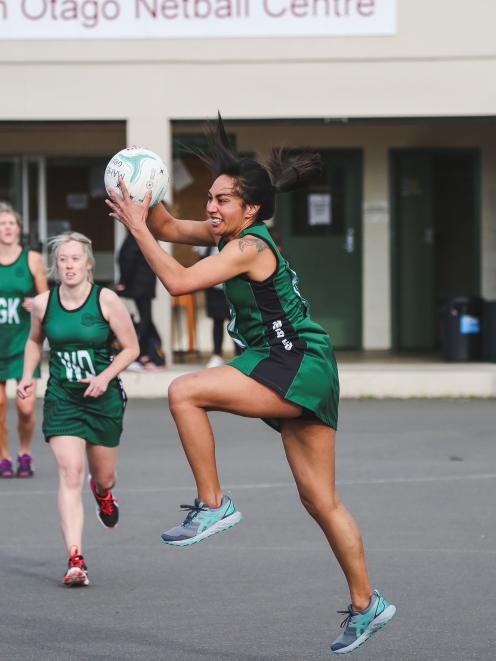 Maheno Green goal attack Ngapera Yaxley catches the ball.
The Men led 10-5 at the end of the first quarter, before gaining confidence to let the ball go in the second and third quarters, piling on the points.

They led 33-13 at the end of the third, Stephen Ross and Andy Anderson combining well in the shooting circle.

However, they were challenged by Maheno goal keep Phillipa Masoe, while Ella Brown worked tirelessly at centre.

Tessa Souness was injected at halftime, getting the tips to increase the lead to 25-17, before the accuracy of the side’s shooters helped it extend the lead to double-digits.

Brooke Warden led well from the back in the defensive circle, while Summer Borrie also picked up some good ball.

The Waitaki Girls’ Wildfire game against Kurow was rescheduled due to sickness.