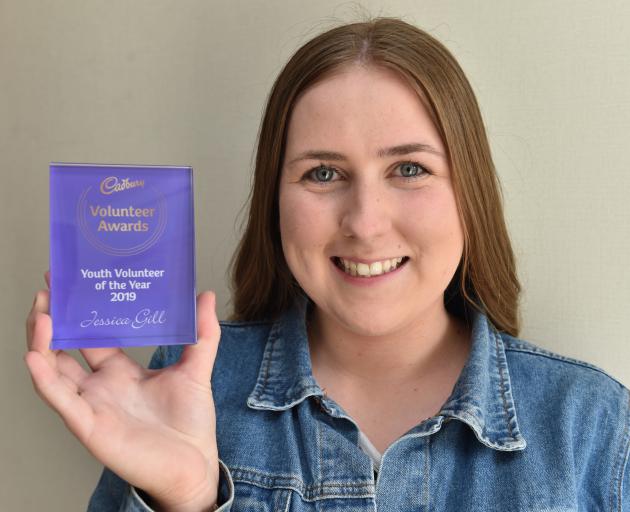 Jessica Gill lets the fact she has been named New Zealand's youth volunteer of the year sink in at her Dunedin home yesterday. Photo: Gregor Richardson
Jessica Gill loves the buzz that comes with volunteering.

But the biggest buzz of all came when she was recognised, on Wednesday night, for all she does.

The 18-year-old Queen's High School pupil was named youth volunteer of the year at the New Zealand Netball Awards in Auckland.

She had initially not believed it when she received the phone call in the supermarket a month ago.

It had not been easy keeping it quiet.

But it was worth it and the night itself did not disappoint.

"It was incredible. I never thought I'd get a prestigious award like this," she said.

Gill has been volunteering in netball for five years through coaching and umpiring.

She began coaching a team at Carisbrook School and in her third year took on a second team.

This year she coached a team at both Carisbrook and St Clair Schools.

On top of that, she umpires and this year began doing that at a senior level on Saturdays.

She also runs a skill academy for players from their early primary school years through to year 8.

Her focus there is to build their skills and introduce them to the game.

Around that she plays for the Queen's senior blue team as a wing defence and goal defence, as well as a social team.

She was unsure how many hours per week all that equated to, although she said it was the focal point of her life.

"When I first started I knew I loved netball.

"I wanted to give back something to my community - just getting involved and be out there - because I love taking up leadership roles and things like that.

"I think volunteering is an amazing experience, no matter what section you're working in - the coaching, the umpiring, the administration. You see the players grow and you get a buzz from it."

The awards evening had been special in many ways.

She had enjoyed the ceremony and staying at the hotel.

Likewise she got to talk to many of her favourite players, as well as Silver Ferns coach Noeline Taurua.

Gill begins university next year, where she plans to study sport development and management at Otago.

She was not the only southern award recipient.

She won the same award in the then-transtasman league in 2016.

Crampton was yesterday on a flight heading overseas and unable to speak to the Otago Daily Times.