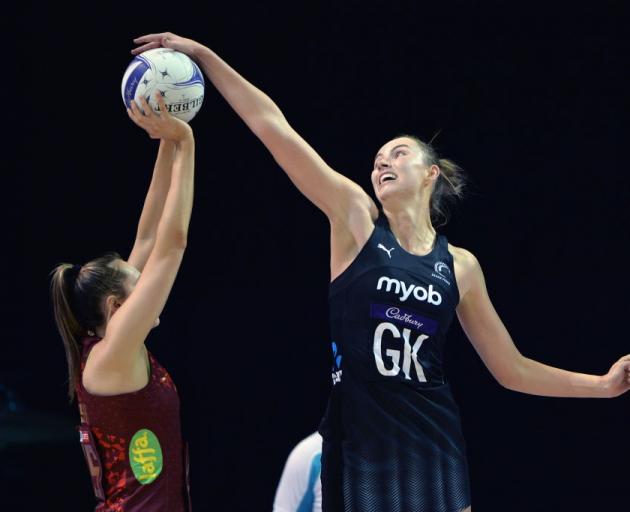 The New Zealand side beat the England Roses 48-42 in the first of three tests this week in Christchurch to continue their dominance over the Commonwealth Games champions, who they claimed a clean sweep of wins over last year.

Cracks did show at times for the Ferns, but that's perhaps understandable given the number of recent challenges.

While the Roses were locked up, the Ferns were locked down amid the country's recent Covid outbreak and left with limited time together heading into the series.

Their planned training camp in Wellington last month was also canned as squad members trained from home and kept in contact over zoom.

New captain Gina Crampton said she was pleased with her side's efforts.

"I'm very happy with that, it was a big grind for us so ticks all around," she said. "But we are trying to get the consistency up."

"We had targets in terms of our stats that we'll look at, but considering our build-up and the short time we've had as a team, it was a great performance."

It was an evenly matched first quarter with just one goal separating the sides.

The Ferns were in front but the Roses more accurate under the hoop, prompting Ferns coach Dame Noeline Taurua to focus on a message of improved attack at the first quarter-break.

Shooter Tiana Metuarau stepped up in the circle in her international debut.

Her partnership with Maia Wilson showed potential as the young duo were put to the test by the Roses' defence.

England captain Geva Mentor constantly disrupted the ball inside and around the circle, while goal defence Layla Guscoth was dangerous in the air, picking up four intercepts.

But it wasn't enough to stop the Ferns from pulling away.

Heading into the second half, ahead by five, the Ferns saw a couple of positional changes with Sulu Fitzpatrick and Claire Kersten coming off the bench.

The Roses, meanwhile, made just one, introducing Imogen Allison at wing defence.

England made small gains in the third quarter as their shooting unit of George Fisher and Eleanor Cardwell held composure under the hoop.

The Ferns midcourt led by Crampton put up strong center pass defence to keep their opponents at bay.

It wasn't until the final 15 minutes that the Ferns were put under pressure.

With the scoreboard all tied up, it was crunch time. Metuarau, again, rose up as the leader in the circle keeping her shot record to 100 percent, rewarding the efforts of her defenders.

Karin Burger snagged a timely intercept to push New Zealand back in front before a flurry of turnovers in the Ferns favour put them back into a comfortable position to claim the win.

The Silver Ferns will play the England Roses in the second test on Wednesday night.