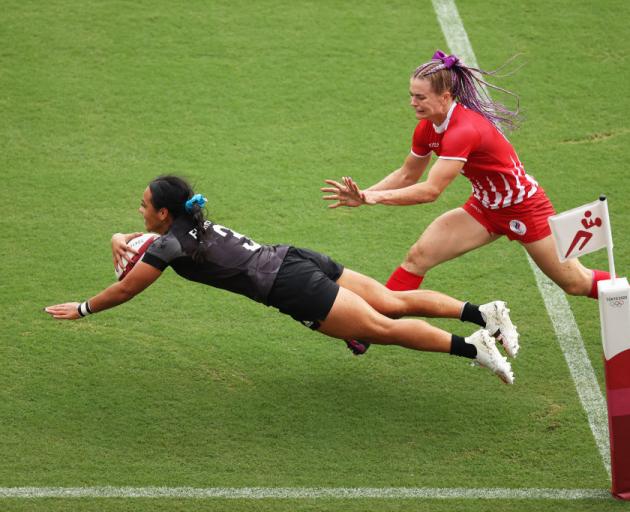 Stacey Fluhler of Team New Zealand scores a try in the Women’s pool A match between against the ROC. Photo: Getty Images
Unperturbed following a delay caused by lightning concerns, the Black Ferns sevens maintained their unbeaten efforts to push into the Olympic quarter-finals against the Russian Olympic Committee (ROC).

New Zealand were forced to wait an hour-and-a-half before taking the field in Tokyo for their final pool match against the ROC due to the threat of lightning, which may affect the timing of their scheduled quarterfinal at 8.30pm tonight.

Despite the disruption the Black Ferns made light work of Russia, winning 33-0, to bank their third successive victory.

Due to a quirk in the draw, the Black Ferns sevens will rematch Russia in the quarter-finals after they qualified as the eighth best team from the three pools of four.

One more point for New Zealand would have been enough to eliminate Russia and promote Canada.

The Black Ferns, silver medallists from the Rio Games and hot favourites to claim gold in Tokyo, qualified top seeds for the quarterfinals. France qualified second with the USA, who stunned defending gold medallist Australia 14-12, third.

In their final pool match the Black Ferns were never troubled by Russia. New Zealand led 14-0 at half time, with Ruby Tui collecting a double and setting up another in the second half to make amends for several errors against Great Britain yesterday.

After that Great Britain match, Tui told Sky Sport: "There's not enough hand sanitiser in the whole of Japan to clean that act up. That was just absolutely terrible."

Portia Woodman struck straight after the break against Russia and Stacey Fluhler bagged a brace – one coming from a Tui kick. Tyla Nathan-Wong also crossed to ease concerns after the Black Ferns sevens survived a major scare in coming back from 21-0 down to defeat Great Britian 26-21 yesterday.

"After that performance against Great Britain last night we wanted to come out here and make a statement, I think we did that," Woodman said after their dominant victory.

In their opening pool match New Zealand eased past Kenya 29-7.