Carrington on track in quest to be best 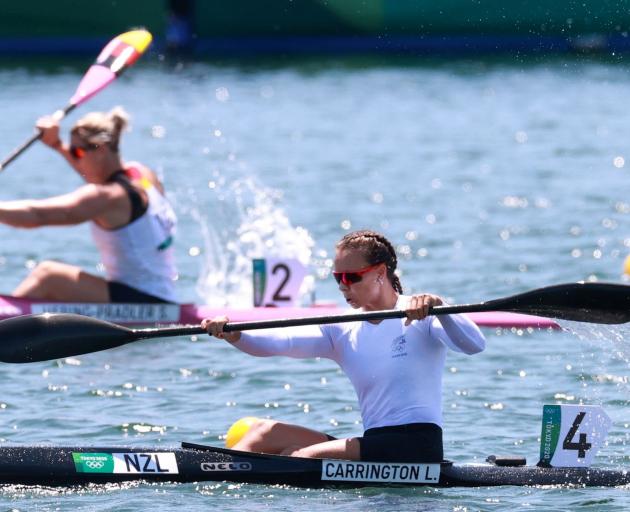 Lisa Carrington in action during her K1 500m heat today. Photo: Reuters
Lisa Carrington's quest to become New Zealand's most successful Olympian gathered pace today as she powered out of her heat of the K1 500m straight into the semifinals.

Carrington won the sixth and final heat of the discipline in 1m 48.463s, easing off in lane four when it was clear she was not going to be caught by rivals Sabrina Hering-Pradler (Germany) and Austria's Viktoria Schwarz.

Carrington recorded the third-fastest time of the heats, though they are not particularly important, as the key to qualification was placing in the top three. From the moment Carrington drove out of the gate and put a boat-length on her rivals within the first 100m, there was never any danger, capsize aside, of missing out.

The top three from each heat progress straight to the semifinals, while the rest are forced into a quarter-final later today. With a busy programme on the Sea Forest Waterway, avoiding unnecessary races was important.

Carrington will be joined in tomorrow's semifinals by her K2 500m partner in triumph Caitlin Regal.

Racing out of lane one, Regal had to endure a false start which added a Monty Python element to proceedings – K1 500m for those with no sense of direction – as the paddlers made their way back to the starting gates.

Undeterred, Regal made a strong start and led by .08s at the 250m but faded a little in the second half. She finished third behind Sweden's Linnea Stensils and Alyce Wood of Australia, and her 1m 50.297s was just .201s ahead of the fourth-place finisher.