A riveting race for the bronze medal in the men's team pursuit between New Zealand and Australia turned hollow on the track of the Izu Velodrome on Wednesday night, with the Kiwis losing a rider to a crash inside the final 1700m of the 4000m race.

Riding on the back of the quartet, Aaron Gate got his wheel on the underside of the rider in front of him, then hit the deck as he tried to correct his position while Regan Gough peeled off the front to exit the race - as one member does late in the piece in the team pursuit.

At the time, the Kiwis held a slim lead heading into what was shaping up to be a frantic finish. 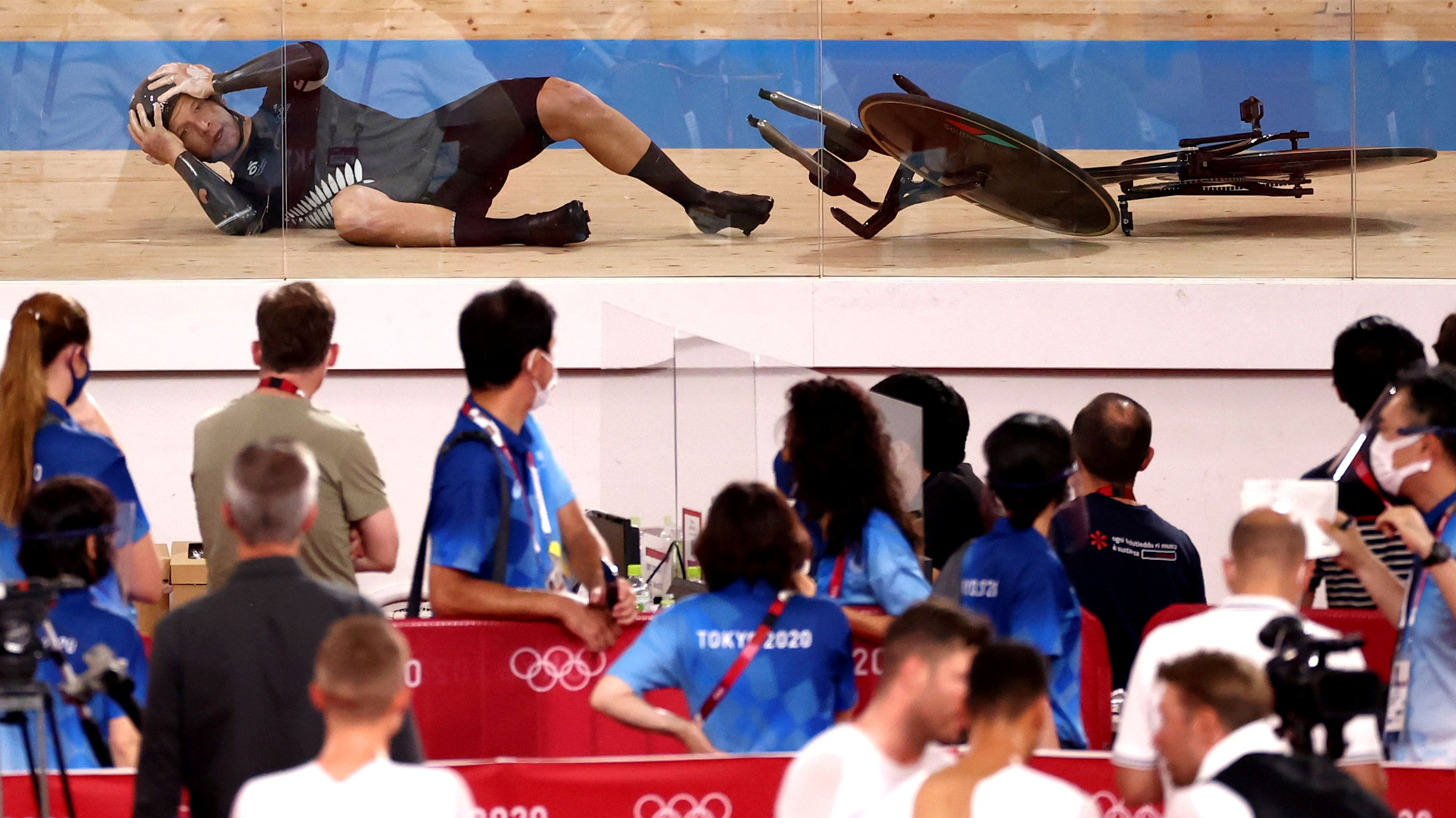 Aaron Gage after crashing out of the bronze medal final. Photo: Reuters
The crash left the New Zealanders in disarray, with the rider who peeled off the front unable to get on the wheel of the other two teammates still in the race. The two lead riders took a moment to notice, and eventually, the Kiwis were riding by themselves.

The Australian team caught the back New Zealand rider inside the final 400m to overlap the Kiwis, which brought an end to the race and saw Australia claim the bronze.

"It couldn't have happened at a worse time," Gough told Sky Sport after the race. "I was doing what you call a suicide turn and getting out of there, emptied everything I had then ejected, then you hear a guy crash and have to continue, it's literally the worst thing that could have happened."

The New Zealand team were riding at about 67km/h when Gate went down, and there was a loud thump as he appeared to hit his head against the slanted wall of the velodrome.

Gate was able to walk away from the crash but sustained visible burns to his hands and right shoulder from sliding across the velodrome floor, with the combination of the high speed and hard floor causing his skin suit to tear. As he walked away after the race, Gate turned to the camera and mouthed "sorry".

Speaking to Sky Sport, New Zealand men's track endurance coach Craig Palmer said the team was devastated, but no one was looking to blame an individual.

"The boys will be absolutely devastated; they are devastated. A lot of work, they knew they were in good shape coming in, and they had executed their first two rides brilliantly. I think they know what they were capable of and what could have happened, but not to get it across the line, they're pretty damaged right now.

"We're all in this together, there's no individual blame. We'll assess it, we'll debrief it, but at the end of the day we all go out there together, we live and die by it. They're a really strong unit so there will be no blame."

The men's team pursuit was the first of three events Gate was entered in during the Tokyo Olympics, with the Omnium - an event made up of four separate races - and Madison endurance race still on his agenda.

Filippo Ganna inspired Italy to a long-awaited gold medal in the men's team pursuit as they produced an electrifying finish to stun favourites Denmark in a see-sawing final.

The Azzurri trailed in the closing stages of the 16-lap duel but lead engine Ganna turned up the power and they blasted across the line in a world record 3:42.032, with the Danes an agonising 0.166 slower.

Italy's quartet of Ganna, Simone Consonni, Francesco Lamon and Jonathan Milan, who had also set a world record on Tuesday, celebrated wildly, thumping their fists into their chests, after delivering their first gold in team pursuit since 1960.

The blue-clad Italian train led for the first half of the 16 laps around the 250-metre oval, but Denmark piled on the pressure to reel them in.

The Danes then turned the screws to open up what looked like a decisive lead, and with less than four laps remaining their foursome of Lasse Norman Hansen, Niklas Larsen, Frederick Madsen and Rasmus Pedersen had a buffer of almost a second.

But Italy were not done. Ganna lit the fuse, and the four began burning down the deficit. With a lap remaining Denmark still had gold in their sights but it slipped away in the final 100 metres as Italy claimed a record-extending eighth title - and their first in over 60 years.

"We knew we were fighting against a very good team. We knew we had to attack them in the last km and that's what made the difference," Ganna told reporters. "The plan went well and now we have the gold medal around our necks."