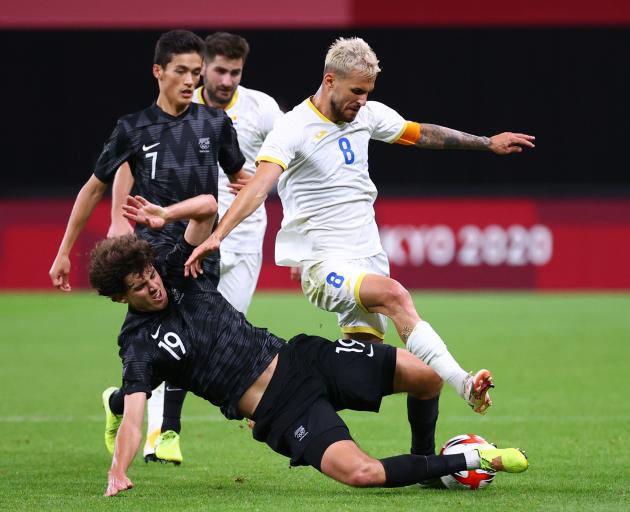 Olywhite Matthew Garbett makes a play for the ball with Marius Marin of Romania. Photo: REUTERS
The New Zealand men's football team have made history by reaching the knock-out stage at an Olympics for the first time.

The OlyWhites goalless draw with Romania at the Tokyo Games on Wednesday night meant they finished second in their group ahead of the Romanians on goal difference.

"It really came down to desire tonight and the boys really dug in and showed a lot of that.

"I'm really proud of the performance. It's historic and we look forward to a quarter-final for a New Zealand men's team."

The OlyWhites will play against Japan in the last eight.

Defending champions Brazil advanced to the quarter-finals with a 3-1 victory over Saudi Arabia that helped them top Group D, while Ivory Coast booked their berth by sending Germany home.

Japan advanced after delivering the knockout blow to 10-man France with a 4-0 win to stay perfect in Group A. Takefusa Kubo, Hiroki Sakai, Koji Miyoshi and Daizen Maeda all scored for the rampant hosts while Randal Kolo Muani was sent off for France.

Mexico, who pipped France to second place in Group A with a 3-0 win over South Africa, will meet South Korea.

Spain progressed as Group C winners after a 1-1 draw with Argentina as Mikel Merino's second-half goal was cancelled out by Tomas Belmonte with three minutes to go.

Egypt joined them after a 2-0 victory over Australia lifted the African side to second in the group above Argentina on goal difference.

Ivory Coast went through at the expense of Germany, securing a 1-1 draw with the 2016 silver medallists at Miyagi Stadium.

The African side took the lead in the 67th minute, when Benjamin Henrichs attempted to make a tackle in the six-yard box and ended up putting the ball into his own net, but substitute Eduard Loewen scored with a free kick six minutes later.

Germany piled on the pressure in the dying stages but Ivory Coast held on to finish second in the group and set up a meeting with Spain.