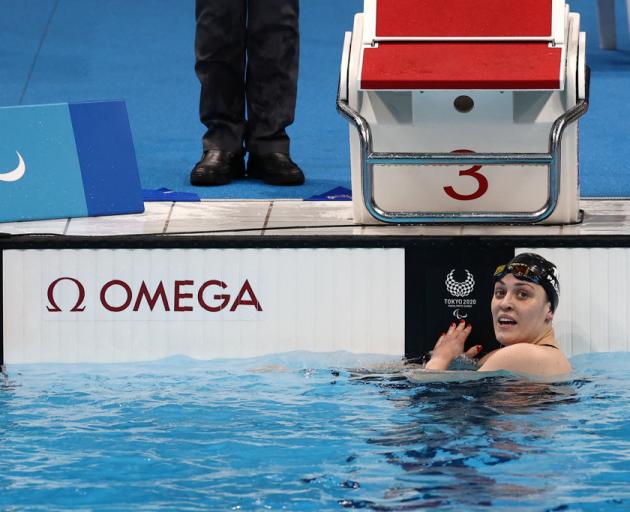 Sophie Pascoe finished fifth in the butterfly tonight but takes home four medals - two golds, a silver and a bronze - and now has 19 medals in a stellar career. Photo: Getty Images
New Zealand's Sophie Pascoe has been denied a 20th medal at a Paralympics, coming fifth in her last event in Tokyo.

Pascoe began strong in tonight's 100m S9 butterfly final and was leading with about 25 metres to go, but faded out of medal contention as Hungary's s Zsofia Konkoly stormed home for gold.

Pascoe (28) was bidding for a third consecutive butterfly gold - and her third gold of the Tokyo Games - and on paper was the favourite as she holds the world record for this event in a time of 1min 02.48sec.

But after having to be revived with oxygen following her gold medal swim in the 200m SM9 individual medley last night, and with a heavy schedule in Tokyo, there were doubts going into tonight's final.

The fastest heat time this afternoon was recorded by 19-year-old Konkoly (1min 07.05sec), whom Pascoe narrowly beat in Wednesday's medley.

Pascoe had spoken before these Games about being underprepared due to a lack of international competition during the pandemic, and had mentioned during the week her respect for the younger generation coming behind her. It appeared those two factors combined to squeeze her off the podium tonight.

After the race a visibly upset Pascoe told TVNZ she'd given it everything she could, but it wasn't enough.

"You can obviously tell despite the programme and the training that I've done in the past year that I didn't have it in the last 25 metres.

"All respect to those girls out there, they've obviously done the work, and they had something a bit more than I did for the final. It's pretty gut-wrenching right now. But it is what it is and I left it all out there.

"[It felt] really hard. You can probably tell by the footage that I wasn't moving very much. That's where I just need to work on the kick and the stroke rate. I just didn't have it.

"I've got a lot more work to do. But with the past year, even being here and doing the programme that I did, even getting what I have achieved throughout this meet, it's been a journey and a half.

"I wish nobody would have to go through the journey that I went through last year - I wouldn't wish that on anybody. I know that I can't go through that journey again if I want the results."

Pascoe began strongly in the butterfly and led until the last 25 metres of the race. Photo: Getty Images

Although she didn't medal tonight, the Christchurch swimmer's legacy continues to grow.

Having already become New Zealand's most decorated Paralympian with 15 medals before she hit the water in Tokyo, Pascoe  first collected a silver in the 100m breaststroke, then a bronze in the 100m backstroke before bagging two golds.

After joining the elite club of fewer than 40 athletes to have claimed 10 gold medals at a Summer Games when she won gold in the 100m freestyle (S9) event in Tokyo on Tuesday, she picked up an 11th gold in the 200m individual medley last night.

It completed a famous fourpeat - adding to gold medals she had won in the 200m IM in Beijing, London and Rio.

There's no indication that Pascoe is contemplating retirement.

Last night she said she would in future cut down her programme and that she had swum her last 200 individual medley and would now focus on shorter events. She was visibly unwell after last night's race and briefly blacked out on the side of the pool.

She has amassed 19 medals - 11 golds, seven silvers and one bronze so far in her stellar career.