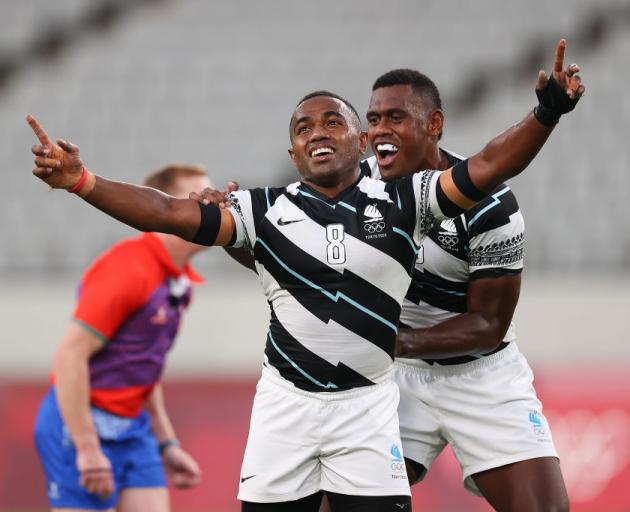 Waisea Nacuqu celebrates after winning the Rugby Sevens Men's Gold Medal match against New Zealand. Photo: Getty Images
Five years after sevens made its Olympics debut, the world was tonight treated to a dream final in the event.

But unfortunately for New Zealand, it wasn't quite a dream result.

The All Blacks Sevens had to content themselves with the silver medal after being overpowered by great rivals Fiji 27-12 at Tokyo Stadium tonight.

It was New Zealand's second sevens silver after the women's side were runners-up in Rio five years ago, a collection that may soon increase with the Black Ferns Sevens kicking off their campaign tomorrow.

But despite that silver hue that now complements the black jersey, the men's side fell just short of the redemption they were seeking after the horror show of Rio 2016.

The All Blacks Sevens were nervous debutants at those Games, losing to Japan and Great Britain in pool play before being dumped out of the quarter-finals by eventual champions Fiji.

New Zealand's woes denied the sport of sevens what would have been a fitting finale to its first inclusion at the Olympics - but the wait for such a showpiece was fortunately brief.

The match-up between the traditional rivals of men's sevens was always destined to be the best advertisement for the game on the global stage, and it delivered on that promise tonight.

That will be of little consolation for New Zealand - the silver medal hanging around the players' necks will undoubtedly provide a measure of.

Most of Fiji's players were in tears as their anthem rung out but, moments later, the prevailing emotion was joy, as the defending champions' early tactic of kicking undid the challengers.

First, Joe Webber had the ball ripped from his grasp and Fiji quickly capitalised through Meli Derenalagi. Then, from the next play, Andrew Knewstubb failed to ground the ball following a deep kick, gifting a try to Sireli Maqala.

A frantic opening took another turn when Kiwi co-captain Scott Curry showed his power and pace to slip through a hole 40 metres from the line and hand New Zealand a lifeline.

But Fiji were soon right back on top when Jiuta Wainiqolo powered through a couple of would-be tacklers on the right touchline to score his side's third.

And there was still time in the first half for Sione Molia to pull back a scrappy try after the hooter, cutting the deficit to 19-12 at halftime.

The pressure of the occasion - absent during the first half - seemed to become a factor after the break as attacks were undone by mistakes and defence came to the fore.

Two moments exemplified that and soon sealed the outcome. First Regan Ware's promising break came to nothing after the ball sprung loose from his grasp, then Asaeli Tuivuaka crossed for the decisive try as Fiji somehow unlocked a resolute Kiwi rearguard with a timely display of their ball skills.

New Zealand were unable to produce a miraculous comeback and Fiji were left to celebrate their second straight sevens gold, remaining undefeated in Olympic men's play.

Their quality was just too much for New Zealand to overcome, but Clark Laidlaw's team will one day soon be able to reflect on an excellent tournament.

They appeared to build well through the last few days, with their semifinal success over Great Britain their best all-round performance, guaranteeing the country another medal for its tally.

But once Fiji took care of business against Argentina in the second semifinal, New Zealand must have known gold would be a tall task.

In the third-place playoff, Argentina won their first sevens medal, backing up their under-manned victory over South Africa in the quarter-finals with a 17-12 win over Great Britain.