0 Comments
Back on home turf in Queenstown, snowboarder Tiarn Collins is processing an avalanche of achievements from his best season so far.

In March, Collins (22) glided into New Zealand snow sport history, becoming the first Kiwi to win an FIS snowboarding Crystal Globe — a victory marking him as the overall winner of the discipline on the world cup circuit.

That came on the back of a long season of "just going for it", which featured Collins claiming bronze in the United States at the Mammoth Mountain round of the slopestyle world cup, competing in the Beijing Winter Olympics and securing a world cup victory in the Czech Republic.

"It feels a little bit surreal," he said.

"I’ve put a lot of effort into it and I’ve really wanted to do well, so for it to actually pay off ... that always feels pretty weird when it happens, but it’s definitely a good feeling."

Collins consistently reached slopestyle finals throughout the season but his preparation for the Olympics was plagued by Covid-19. 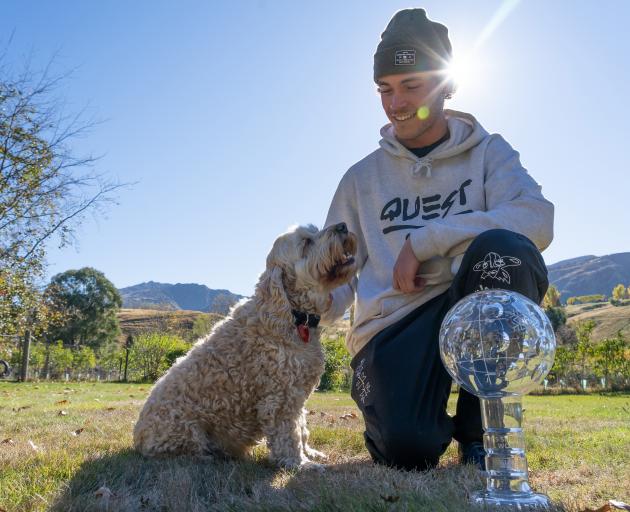 Queenstown snowboarder Tiarn Collins at home with dog Popcorn and the coveted Crystal Globe. PHOTO: AARON ROSS
Despite falling shy of his desired performance in Beijing, he launched into the Czech Republic event with a new-found hunger to compete.

"That event was really cool because it was the first event post-Games so I had this new kind of fire in me, and all the coaches and the crew had gone home because they had just been with us for so long working towards the Games.

"They needed some time off and they deserved it.

"So I had my dad come over and he was my support crew ... and I just said, ‘film me doing this’, and [I] just kind of did my thing with him there.

"Then to get a win while he was there, it was the coolest — one of the coolest moments of my life."

It was not until after that event, when an organiser told Collins he was "looking pretty good for the overall", that sights were set on taking home the Crystal Globe.

"That’s when it really popped into my head and I really wanted to get it."

Although he placed seventh in the final world cup of the season, in Switzerland, Collins had previously secured enough points to claim the Crystal Globe at the event.

Despite the momentous wins, Collins’ favourite moment of the season was at an event just after claiming the trophy.

"It was this kind of small community event ... like a park jam, and I managed to get second there.

"So that was really cool. I got to snowboard next to some my favourite riders and some of the leaders in different areas of snowboarding."

Now back in Queenstown, Collins was taking time to hang out, skate, and catch up with friends.

"What’s next is I’m probably going to go back [overseas] for some camp somewhere and ride some spring — we’ve been in the negatives all year so I’m pretty keen to ride in some sun."

But would be back soon.

"I’m pretty excited for this New Zealand season ... it’s gonna be a fun one."