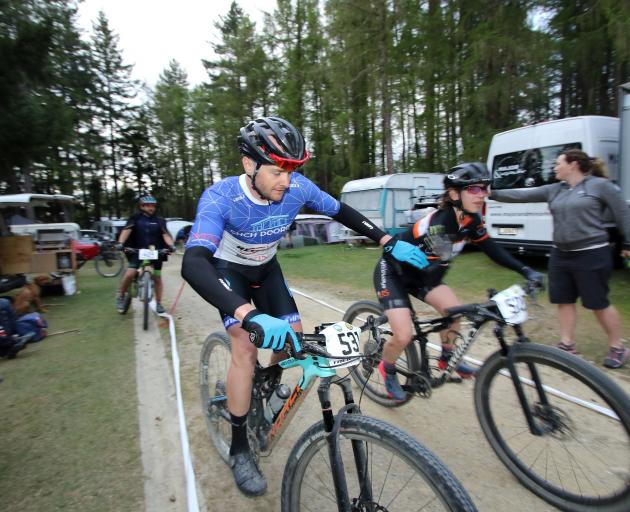 Hefin Price (left), from the winning Smash It in the Dog team, is tapped by team-mate Hannah Miller as he prepares to head out for another lap around the 11.6km course during the Naseby 12-hour mountain bike race on Saturday. PHOTOS: JOHN COSGROVE
After 23 laps of the 11.6km mountain bike circuit at Naseby it came down to a sprint finish as the top two teams ended only five minutes apart after 12 hours of racing on Saturday. 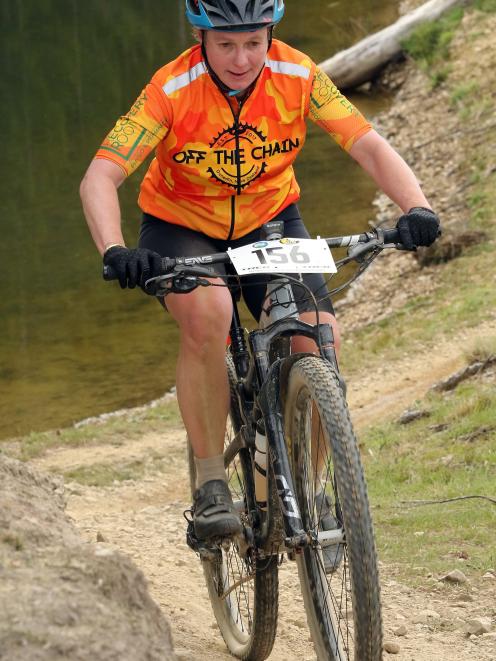 Triple world champion in extreme endurance mountain biking, Ronel Cook, of Dunedin, shows her style in winning the six-hour solo women’s race.
And to add to the drama, the winner was a mixed team competing against an open men’s team.

Smash It in the Dog team member Brent Miller, of Christchurch, said the team was often no more than two to three minutes apart from the Grandsons of Naseby team throughout the race.

"It was a good day out on the trails. We managed to keep them at bay throughout the day and at the end, we held them off by five minutes,” he said.

Team member Hannah Miller said it was hard work to keep the all-men teams at bay, but the races in Naseby were always fun.

"There is such a great atmosphere here, that’s why we keep coming back,” she said.

Smash It in the Dog, Grandsons of Naseby, EPO Express and Slowly Fading all completed the 12-hour race with 23 laps.

"We had 120 three, four and five rider teams and 55 solo riders competing in the 12 and six-hour races which we normally held in April, but this year due to Covid-19 we moved it to the end of the October school holidays and it seems to have paid off, as we had some many more school teams entered.’’

He said over the years the organisers had faced snowstorms, torrential rainfalls and high fire risks, but he felt the change to October might be an option for the future of the race.