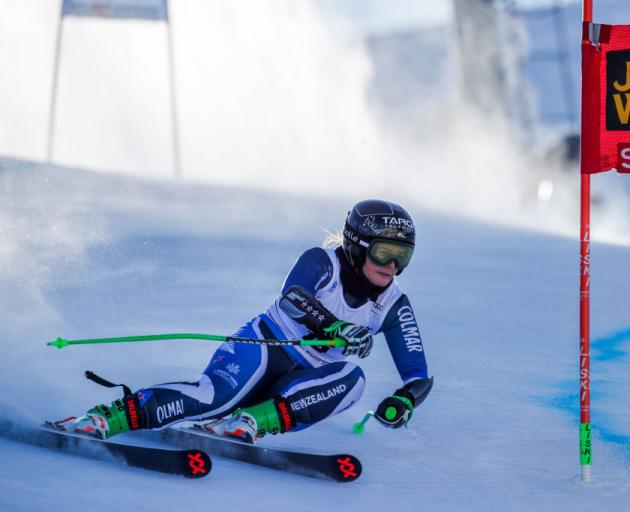 Queenstown skier Alice Robinson has posted her second-best result of the season in the fifth round of the World Cup Giant Slalom circuit in Sestriere in Italy.

The 18-year-old has finished 5th overall after clocking the 4th fastest time on the second run. World Cup leader Italian Federica Brignone and reigning world champion Slovak Petra Vlhova finished tied at the top of the podium with the exact same combined time of 2:21.15.

Robinson who was sixth fastest after the first run posted a combined time of 2:21.59, just .44 of a second off the winners.

Her performance was impressive given it was another slope she had not raced on before.

Robinson was the sixth last to go in her second run featuring the top 30 from the first run and she improved her position by one place clocking 1:10.72, the 4th fastest of the day and finishing just .006 off Switzerland's Wendy Holdener in 4th.

The Kiwi star's coach Chris Knight said Robinson was 'a touch conservative on the first run but was close to the leaders so almost back to her best skiing."

"Alice's speed was there for sure, but a couple of mistakes cost her a podium. However now she will be among the first seeds for the next race which is fantastic." Knight said.

What that means is the young Kiwi will be among the first eight starters to go in the first run, so enjoying the best of the racing conditions. Up until now she has drawn bib 15.

Brignone has extended her lead atop of the Giant Slalom season standings as she and Vlhova both take 100 points each from the race with Olympic champion Mikaela Shiffrin rounding out the podium in third.

Robinson's superb result follows her win in the opening race of the season in Solden in Austria last October, a DNF in Killington in the US, 10th in Courchevel in France and 9th in the last race in Lienz in Austria.

Heading into the race in 6th in the overall World Cup Giant Slalom standings, Robinson has improved one place to fifth with 200 points, just three behind Vlhova in third.

Brignone now has 375 points with Shiffrin remaining second and another Italian Marta Bassino who finished 10th this morning in third. There are four races remaining including the World Cup final in Cortina in Northern Italy in March.

Robinson's next World Cup Giant Slalom race is in Maribor in Slovenia on the 15th of February.