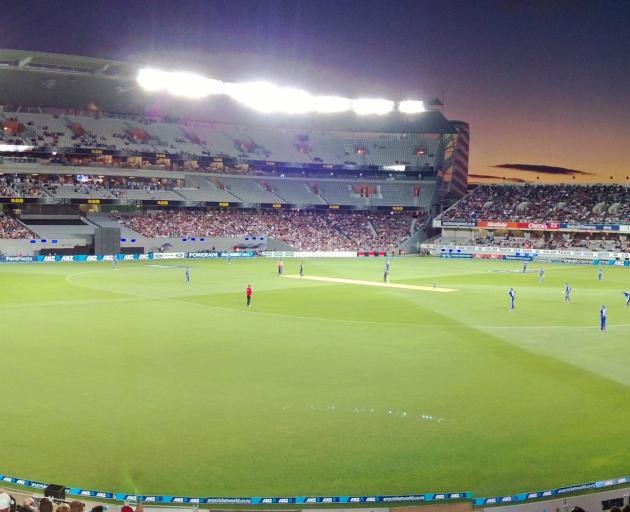 Bringing the crowds back to Eden Park and other venues around New Zealand needs to be a focus according to Nick Sautner. Photo: Wikimedia Commons
Eden Park chief executive Nick Sautner has urged New Zealand sport bosses to find solutions to one of the biggest worries facing the industry at the moment – the falling numbers of Kiwis watching live sport.

The sports industry, both locally and internationally, has found itself having to battle against dwindling attendances in an attention economy where all genres of entertainment are in aggressive competition for a finite amount of eyeballs – or in the case of live events, bums to put on increasingly empty seats.

The rise of streaming and the advancement of TV technology have made things like cinemas and live sport less attractive and worthwhile to the public.

But Sautner says there's nothing that beats the thrill and sense of community that live sport can bring, and there is clearly still a huge demand for such events as shown by a strong Auckland crowd of about 15,000 that turned up to the Wellington Phoenix's win over Melbourne City last Saturday.

"We need to get some diversity in our content," Sautner told Radio Sport Breakfast.

"We are the national stadium. And we see that there are now aspirations from our fans to see more than just cricket and rugby played in our facilities. So we're delighted with our last two years of [Wellington] Phoenix content and look towards hosting further fixtures in the coming years.

"We've exceeded their average in Wellington in all four fixtures."

Eden Park, the country's largest stadium operator, booked another loss last year, largely due to the loss of revenue from sports events. According to the 2019 Eden Park Trust annual report, the yearly crowd numbers from sports events plummeted from 332,200 to 269,400.

Eden Park is currently exploring ways of expanding to concerts and other events.

Sautner says, from the stadium's point of view, sports events are still profitable but there are things that are out of their control like ticket prices, something he says they're trying to work on with their sports partners.

"There's no question those games are profitable," he said. "The more people that attend the venue does see the secondary revenue streams, whether it'd be merchandise or food and beverage or some of the other revenues that we derive from attendance.

"[There are] a number of our member areas we're introducing, whether it'd be new food and beverage options, craft beers, or cocktails on tap, or even blended ice-cream for families to come and experience a food offering and make it a day out. We are in the entertainment space and we're looking to create experiences.

"However, we don't have an influence on ticket price. So that's one of the areas where we work with our hires is to try and get them to understand that the next generation of players need to experience live sport.

"You can't replicate the live experience, whether it'd be the networking opportunities with the people next door to you or indeed the noise of the crowd. And we've seen that whether it'd be the Indian fans throughout this summer, our Super Rugby team and their performance when they're up and about, you see the attendance increase."

New Zealand's sports bosses, who themselves are experiencing revenue losses, recognise the urgency around the dwindling stadium numbers and have tried new ways of attracting fans to games over the last few years.

In 2018, Auckland Rugby announced that there would be free entry to the Mitre 10 Cup final against Canterbury, while there was also a special performance from Kiwi band The Feelers.

Super Rugby also made several changes this year to their fixture lists, pulling back Friday night kickoff times to 7.05pm to create a more family friendly environment, while the season also started earlier than usual during summer.

The latest attempt to get more people out into Eden Park is the 'Codes of Auckland' event, a live cross-code double header coming up in March 21 featuring both the Warriors and the Blues.

Sauntner applauded these initiatives and praised the Phoenix, in particular, for their marketing innovation when it comes to attracting fans to the stadium.

"I do think the Phoenix do a great job. They look at different channels to market, whether it'd be some innovation using the likes of TradeMe or GrabOne or various other channels. They're non-traditional channels but perhaps introduce a different demographic to their code."

But at the end of the day, marketing can only do so much if the team isn't winning.

"I know that the Blues with new leadership are looking to implement a number of new initiatives over the coming year. And we're looking forward to getting a winning team on field. And that's undoubtedly a factor. If the team's winning on field, people turn up."