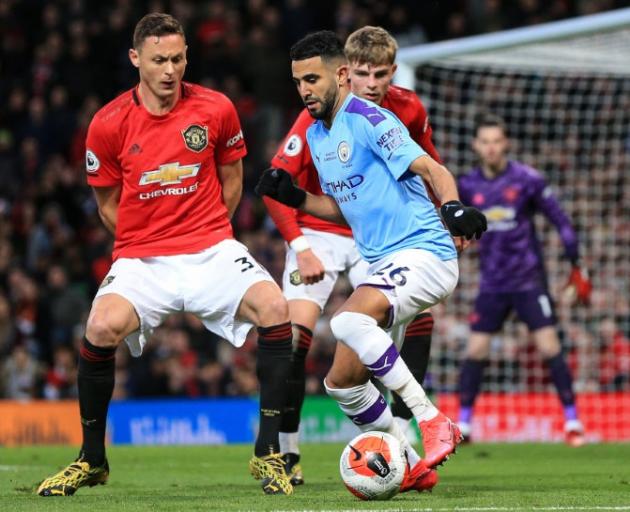 Riyad Mahrez controls the ball as Manchester City plays Manchester United in one of the English Premier League's last games before the coronavirus shut down. Photo: Getty Images
British quarantine rules are set to be relaxed for elite sport in a boost for football clubs in European competition and Formula One's plans for races at Silverstone, the Times has reported.

Britain is introducing a two-week quarantine period from June 8 for most people arriving from abroad to guard against a resurgence of the COVID-19 pandemic, with sport not specifically excluded.

The Times reported that the government was prepared, however, to exempt elite sports events if detailed plans regarding movements and activities were approved.

A Formula One spokesperson said in response to the report that the sport welcomed "the government's efforts to ensure elite sport can continue to operate and their support for our return to racing.

"We will maintain a close dialogue with them in the coming weeks as we prepare to start our season in the first week of July."

The sport, whose season has been delayed by COVID-19, plans to issue a revised calendar next week with two races behind closed doors in Austria on July 5 and 12, followed by a grand prix in Hungary before two races in Britain in August.

Formula One plans to keep the teams, seven of them based in Britain, in a safe environment with regular testing and minimal contact with anyone outside the circuit. Staff will fly in on charters.

Quarantine would have affected their ability to come and go as well as restricting Italian teams Ferrari and AlphaTauri as well as Swiss-based Alfa Romeo.

Manchester City and Chelsea are still in soccer's Champions League while Manchester United, Wolverhampton Wanderers and Glasgow Rangers are playing in the Europa League. Those matches could also take place in August.

West Indies and Pakistan are also due to tour England this summer.

Culture secretary Oliver Dowden said on Saturday that "football, tennis, horse racing, Formula One, cricket, golf, rugby, snooker and others — all are set to return to our screens shortly."