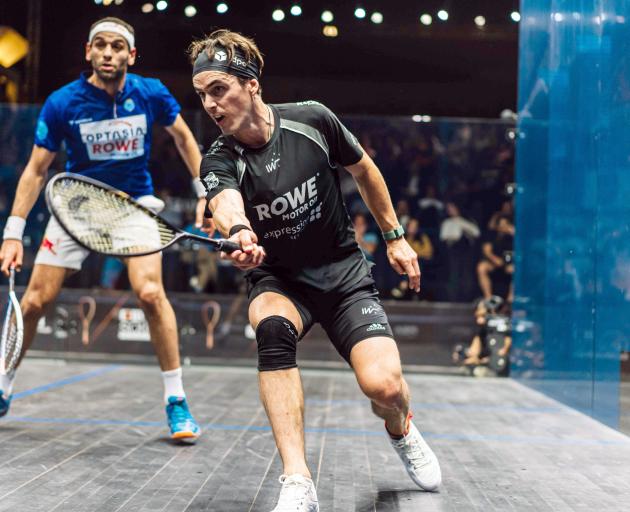 The loss also puts the world No 1 ranking in doubt for Coll as the battle for the top spot continues against Egyptian Ali Farag, who can reclaim the position if he wins the tournament.

Going into the match, third-ranked El Shorbagy had looked in deadly form against fellow Alexandrian and world No10 Fares Dessouky in his quarterfinal, while Coll had come through an exhausting 122-minute win over former champion Tarek Momen.

There were worrying signs for Coll (30) in the early stages as he was caught out of position several times in opening game.

Greymouth’s favourite son sported strapping on his right knee and struggled to react to El Shorbagy’s shots at the front of the court.

After taking the opening game 11-4, El Shorbagy continued to play immaculate squash early on in the second.

Coll was able to drag El Shorbagy wider as the second game progressed, which allowed the Kiwi to move from 4-4 to 6-4 up.

More lengthy rallies followed, which appeared to favour a rejuvenated world No1, who asserted himself well around the court to bring the scores to 1-1 with an 11-8 win.

The long rallies came in the third game, which was even until a fiery El Shorbagy pulled clear to have three game balls.

El Shorbagy then took the fourth game 11-8 to force the match into a fifth game, during which the 31-year-old stepped further and further up the court as the adrenaline surged and took a commanding 5-0 lead.

Full of confidence, El Shorbagy continued to balance watchful rallies with his signature brutal attacking squash, timing his attacks to perfection to seal a memorable victory with an 11-7 win.

The next tournament for Coll is the El Gouna tournament in Egypt starting later this week.