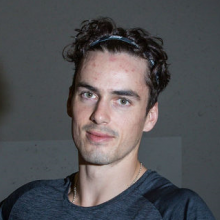 He defeated Egyptian Marwan ElShorbagy in a five-game thriller in the semifinals.

Coll had never beaten ElShorbagy before, and it was the world No10 who started the stronger of the two.

ElShorbagy raced into a big lead in the first game, Coll came fighting back to level it at 9-9, but ElShorbagy was able to win the final two points to lead in the match.

Just two points were scored in the second game before an extended injury break, as a slight collision between the pair left the Egyptian with an upper leg injury. After 15 minutes, he came back on to the court much to the delight of the crowd.

He started where he left off and was able to pull out into a five-point lead. But the New Zealander fought back once more and this time he was able to take the game 11-9 to level the match.

In the third game, ElShorbagy ran riot in the opening exchanges once more and he held on to move back in front.

Both men started the fourth by hitting some winners, and it was tight through the middle period. But the Kiwi was able to win five straight points to take the match into a deciding fifth game.

The fifth was the only game in the match in which Coll took an early lead, and it was one he would not relinquish.

He advanced to the world championship final for the first time in his career, setting up a clash with Egyptian Tarek Momen in the final.

"I feel over the moon. It is a pretty surreal feeling but like I said yesterday, I am just going to enjoy the moment as it is, but then focus on tomorrow because tomorrow is the biggest match possible and I want to firing for that," Coll explained after the 9-11, 11-9, 8-11, 11-6, 11-7 victory in 84 minutes.

"Marwan is one of the best in the game at winning quick points and he did exactly that at the start of the first three games.

"I was kicking myself because my game plan was to not let him do that.

"I did not feel like I was playing terrible squash - there were just a few wrong shot selections.

Coll's clash with Momen is a huge opportunity as the pair have played six times - the head-to-head results stand at 3-3.