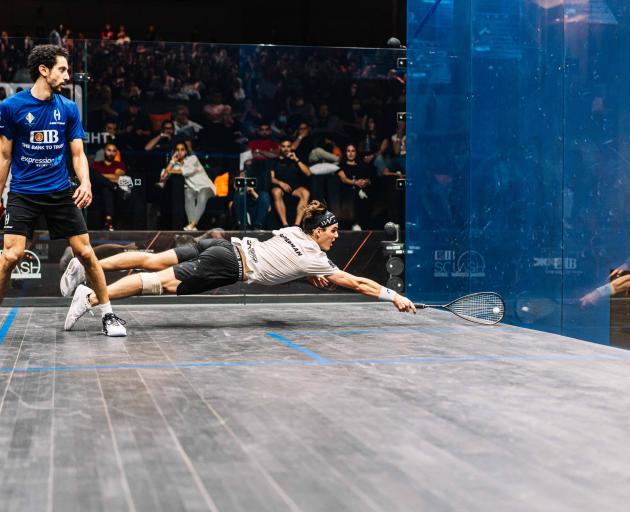 Before the match, the two shared a relatively even 8-5 head-to-head record in Coll’s favour, although the past five had gone to Coll.

Despite dominating the first game, Momen found himself behind after Coll recovered from 7-3 down to take the opener 11-8.

In a fantastic second game, Momen began to play his attacking shots with increased confidence, putting some hurt into Coll’s legs as he moved the Kiwi all over the court.

Momen reached game ball at 10-9 after playing some excellent squash at the front, but was unable to convert as Coll took the game to a tiebreak.

Momen had another game ball at 11-10, but once again Coll clawed things back to level before inflicting a morale-shattering 13-11 win to take a 2-0 lead.

In a brutal third game, both men threw absolutely everything at each other, pushing the ball to the back of the court in a nerve-shredding contest.

To the delight of the nosy crowd, it was Momen who was able to take this game, edging his way back into the match with a 12-10 win.

World No1 Coll appeared to struggle in the fourth and was blown away by Momen, who took the match into a fifth game with an 11-2 victory.

In a wild finish, both players played some of their best squash, before the match ended on a controversial stroke decision in Coll’s favour as he closed out the match 11-9 in the fifth game.

“It’s very hot out here and he was taking me into all corners of the court and wasn’t missing," Coll said after the match.

"I’m just very happy to claw my way out of that one.’’

Coll, a two-time British Open champion, will now face either Mohamed El Shorbagy or Fares Dessouky in the semifinals tomorrow.