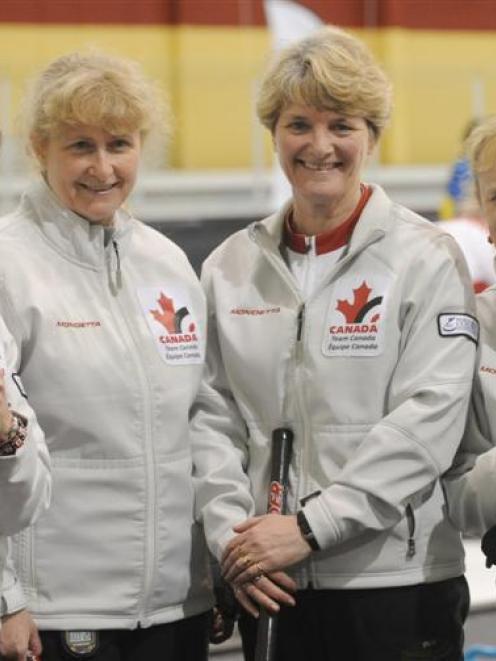 It was the fifth time the Canadian woman had won the gold medal at the senior championships since the event started in 2002.

It has become the accepted result.

It was the first senior title for the team from the Juan de Fuca Curling Club in British Columbia.

But three members of the team had success in open international curling in their younger days.

It was easier this time.

"When I won my gold medal in 1987, it was as though I was on a speeding train that was out of control," Sanders said.

"This time, I am playing with my friends."

Coach Wes Craig had devised a simple plan for the final.

"Our plan was to keep control of the house," he said.

Canada took control by scoring a four on the first end and Switzerland had to play catch-up curling after this.

It was always going to be difficult because Canada had strong hitters who were prepared to blast the Swiss stones out of the house.

"We tried to spread our rocks to the side of the house to get the Swiss to attempt to hit them out," Craig said.

The Canadians had a defensive strategy throughout the championships and the target was to get two shots in each end and be prepared to give one up if it was necessary.

The Canadians scored a one on the second end and followed it with two, two and one on the next three ends to lead 10-0 after five of the eight ends.

One more end was enough before the Swiss team capitulated after getting one point on the sixth end.

The Swiss had won bronze medals in 2006 and 2008 and wanted a medal of a different colour this time.

They achieved this by beating Scotland 7-6 in the semifinal to gain the right to play off for gold and silver.

Canada won the other semifinal when it beat Sweden 8-4.