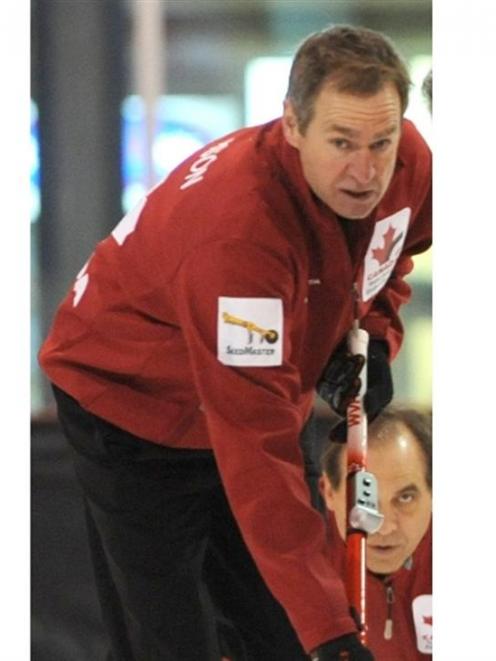 Canada's Verne Anderson in action against Hungary at the world senior curling championships in Dunedin this week. Team-mate Dave Folk is in the background. Photo by Peter McIntosh.
Verne Anderson lives in small-town Canada. The grain farmer's home town of Wadena has a population of just 1500 people.

His curling club has a four-sheet curling rink and a membership of 250.

"Most small towns or villages have an ice rink," Anderson (57) told the Otago Daily Times.

"There is a nearby village with 200 people and it has a two-sheet curling rink.

"It is not unusual for small towns in Canada. Curling is losing players in our province but our town is holding up well.

"There are so many more things for young people to do today. When I was growing up you had ice hockey or curling. Every small town had those rinks. I also played ice hockey."

There are 1.6 million curlers in Canada, which explains why the country has dominated the sport internationally at all levels.

But it makes it more difficult to represent Canada. This is the first time that Anderson, Dave Folk, Kevin Kalthoff and Eugene Hritzuk have made the national team.

Anderson has been curling since the age of 8 and has qualified for just three Canadian championships. He won his first Canadian title last year.

Getting to the world championships was not easy for Canadian curlers, as they needed to play up to 30 games at senior level to qualify, Anderson said.

"Even just to represent my province of Saskatchewan is considered a major accomplishment back home," Anderson said.

"You don't get many opportunities to win the Canadian title."

There were 12 teams in the Canadian championship and the winner qualified for the world championships in Dunedin.

Anderson lives close to a curling rink and plays at least one game a week. He goes out to throw rocks most days in winter.

"This is the highlight of my curling to come here. To win the gold medal would be huge," he said.

Anderson has found the standard of curling between different teams at the world championship varies a lot.

"Back home any team can beat you," he said. "You can lose any game. But here some games are easier than others."

He was impressed by the ice and the standard of the facilities at the Dunedin Ice Stadium.

"The ice is superb. It is first-class. They have done a first-class job."