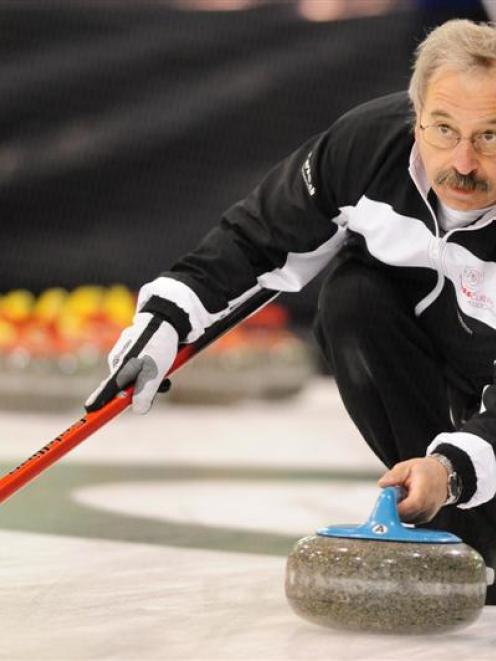 Daniel Gruenenfelder (Switzerland) plays the winning stone at the world senior championships at the Dunedin Ice Stadium yesterday. Switzerland beat Sweden 4-3. Photo by Craig Baxter.
News travels fast. Within 30 minutes of the end of their game, members of the Swiss men's curling team had received a text of congratulations from their home club in Berne.

Switzerland had just beaten Sweden 4-3 in a crunch game to decide which team reached the semifinals at the world senior curling championships at the Dunedin Ice Stadium.

"This was the first message we have received," retired banker Daniel Gruenenfelder (60) said. "It was only 2.30 in the morning back home."

Switzerland will play defending champion Canada in today's men's semifinal and the United States plays Scotland in the other play-off game.

"It will be great to play Canada, but it will be a tough game," he said.

The scorers were level at 3-3 before the eighth and final end.

Gruenenfelder, the lead, drew the winning shot with his first stone and it stayed at the edge of the house for the rest of the game.

Pierre Zuercher drew another shot to the centre of the house and Switzerland had two shots.

Swedish third Per-Arne Andersson upset the Swiss hopes with his first stone by pushing up his own guard and Sweden had two scoring stones.

It was then a cat and mouse game for the next few stones, with Switzerland playing aggressively to clear the deck of Swedish stones, and Sweden putting in blocks.

Swiss skip Andre Pauli (57), a painter and plasterer who has been curling since 1974, cleared the channel with his first stone and pushed out the Swedish shot stone with his second to take Switzerland into the semifinals.

The Swiss played a controlled and cautious game but were prepared to send down aggressive stones to capitalise on Swedish mistakes.

They did this on the fourth of the eight ends to take two shots and the lead 3-2.

A Swedish stone was short and behind the T-line and it allowed Switzerland to steal a second shot inside the centre of the house. The Swedish attack stone just nudged the edge but the stone stayed.

The other member of the Swiss team was the third, Fritz Pulfer (53), the steady rock upon which the win was made.

The US completed a clean sweep of the Red Group when it beat Italy 7-2.

The key member of the US team is skip Paul Pustovar (58), an insurance agent from Hibbing, in Minnesota. He won a bronze medal in the open world championships in the 1980s.

Canada is the defending champion in both the men's and women's championships. The men have won title five times and the women four.

In the women's competition, Canada will play Sweden in one semifinal, while Switzerland plays Scotland in the other one.

Channel 9 will have live television coverage of the finals from 2pm. The commentator will be Canadian Resby Coutts.

It will be repeated on Sunday night at 7.30pm and from Monday it will feature on the Channel 9 website: www.ch9.co.nz.