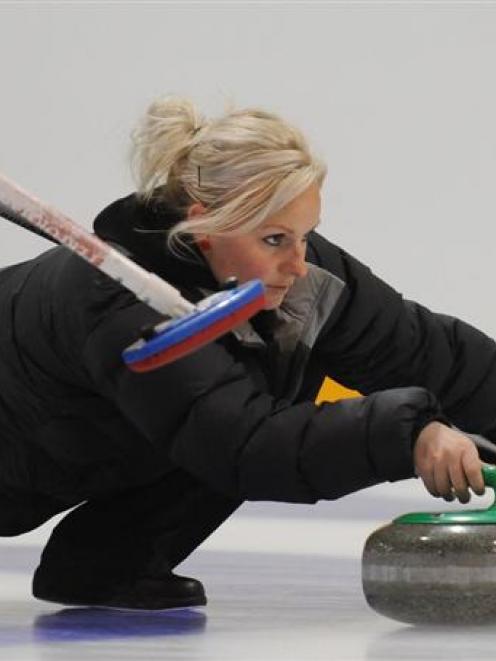 Campbell, the only male in the team, replaced Auckland's Thivya Jeyaranjan who was not available because of exams.

The Wendorf Rock was first held in 1994 and the only other predominantly women's team to win the event was the Kyeburn four in 1995.

That team was Helen Rutherford, and three members of the Greer family - Fen (skip) was the only male and he was joined by his wife Helen and daughter Rebecca.

"We won the event at the old Big Chill ice rink in Dunedin," Helen Greer, who was also playing again at the weekend, said. "The tournament was played on one day then."

It was a good dress rehearsal for the New Zealand women's team that leaves for China next week to play in the Asia and Pacific championships in Nanjing.

"We just tried to play the easy shots and didn't get over complicated," skip Farney said.

It was a well balanced women's team with Donald being the "hit man" with strong drives that were designed to slam the junior stones out of the house.

The other three players were accurate on the draw and put in the positional rocks that the juniors were not able to counter.

It was the first time that Farney (19), a software engineering student at Auckland University, had played in the Wendorf Rock Bonspiel. She will represent the New Zealand's senior women's team for the first time in China.

She displayed an admirable temperament and took vital shots away from the juniors when they had the last stone on the fifth and sixth ends.

Farney was on target with her last stone on both ends when down on the head.

On the fifth end the women were two shots down when Farney drew to the inner circle and juniors skip Sam Miller was short with his last stone.

On the next end the women were three down on the head when Farney played her last rock and drew the shot to the inner circle.

The good early work on the head by the women paid dividends when Miller's last stone was jammed out by the rocks that guarded the circle.

The women's team concentrated on accurate shots and was too steady for the juniors, who played too many loose stones to be competitive.

They also failed to nail the pressure shots that would have kept them in the game.

Peter Becker's Maniototo senior's team was the only combination to beat the New Zealand women at the weekend when they won the last round-robin game 6-5.

But Becker's combination could not repeat the effort and was beaten 10-3 by the Dunedin team skipped by Charlie McLeod in the playoff for the bronze medal.