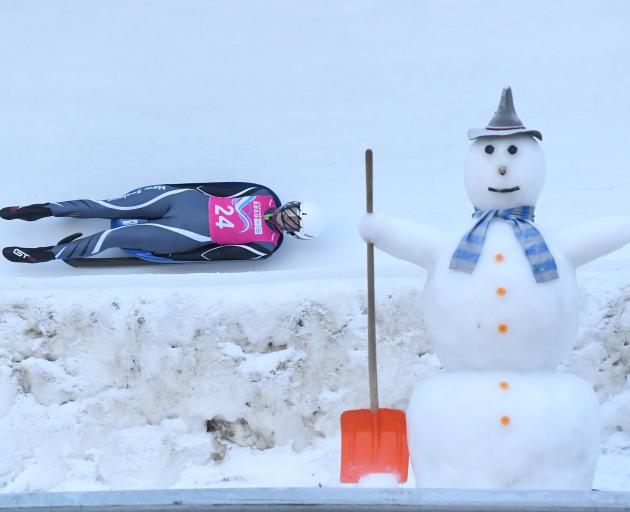 Ella Cox, of New Zealand, competes in the women's singles in luge at the Lausanne 2020 Winter Youth Olympics at St Moritz, in Switzerland. PHOTO: GETTY IMAGES
Dunedin's luge duo have had their first taste of Olympic competition.

Ella Cox and Hunter Burke were in action at the Winter Youth Olympics in Lausanne, Switzerland, over the weekend.

The pair raced at the satellite site of St Moritz.

Cox recorded a combined time of 1min 52.59sec across her two runs to finish 18th.

"My sled skidded at the top of the track on both my runs.

"That’s a really critical part of the track and it lost me loads of time.

"I still really enjoyed the experience, though.

"I’ve made so many friends and have met loads of amazing athletes.

"It’s been a real honour to compete with this group and learn from them."

Burke had a combined time of 1min 52.03sec across his runs, reaching a top speed of 121kmh.

The Kavanagh College pupil, who is moving to Wanaka, said it had been a special experience.

"I had some nerves before the first run and didn't get a very good start.

"After making some adjustments and realising it was my last shot, in the second run I posted my best time of the whole week.

"It’s been pretty special being here and I feel like I've made big improvements this season and can’t wait for next season."

Both will be back in action in the mixed relay.

Queenstown’s Ruby Andrews sustained an injury in training and was unable to compete in the slopestyle.

She will undergo medical assessments before deciding whether to compete in the big air and halfpipe next week.