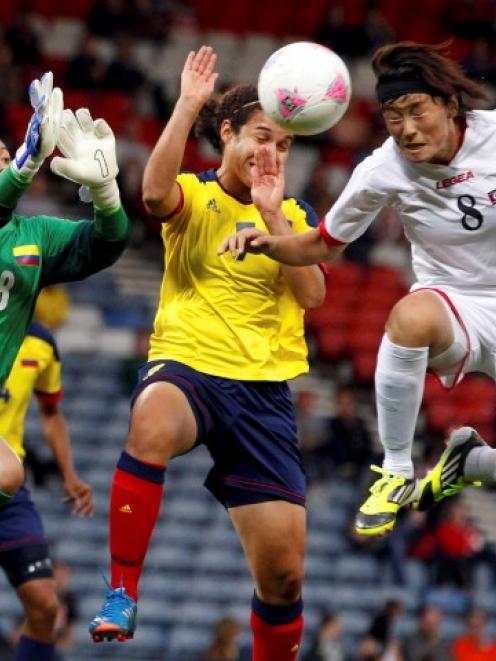 North Korea's Jon Myong-Hwa (R) and Colombia's Orianica Velasquez jump for a header as Colombia's goalkeeper Sandra Sepulveda defends during their women's Olympic Group G football match in Hampden Park, Glasgow. Photo: Reuters
The first day of sporting action at the London Olympics turned into an embarrassing own goal for organisers when the South Korean flag was mistakenly displayed before its sworn enemy North Korea's women's football match against Colombia.

The error prompted the North Korean team to walk off the field and caused a delay of more than an hour before the game, played in the Scottish city of Glasgow, eventually started.

Olympic organisers, hoping that sport would dominate headlines during a round of football matches held two days before the opening ceremony on Friday, were left red faced and apologised to a "very upset" North Korean delegation.

The only glimmer of consolation was that its team won 2-0, following host nation Britain's earlier victory over New Zealand in what should have been the dream start to London hosting the most prestigious event on the planet.

North and South Korea, bitter rivals since the 1950-53 war, have also been drawn against each other in the first round of the men's table tennis team event.

Further souring the mood at London's Olympic Park, where thousands of journalists and athletes were limbering up for the July 27-Aug. 12 showcase, Greek triple jumper Paraskevi Papachristou was withdrawn from the Games for a racist tweet.

Her subsequent apology fell on deaf ears, with the head of the Greek Olympic mission, Isidoros Kouvelos, saying: "She made a mistake and in life we pay for our mistakes."

With doping concerns at centre stage, nine track and field athletes have been banned for violations in a crackdown on the use of prohibited substances at the London Olympics.

The athletes, including leading Moroccan marathon runner Abderrahim Goumri, were all caught with the aid of the Athlete Biological Passport programme, which will be used at an Olympics for the first time in London.

In a mouth-watering taste of happier days to come at an event seven years in the planning and costing more than 9 billion pounds ($14 billion) to stage, Jamaican sprinter and the fastest man on earth, Usain Bolt, promised more glory to come.

The winner of the 100 metres and 200m Olympic titles in Beijing in 2008 fired the opening salvo in what promises to be an explosive 100m sprint final on Aug. 5, for many the blue riband event of the Games.

"This is my time," said the 6ft-5in (1.95m) athlete, as attention turns from a security scandal and transport chaos in the run-in to the Olympics to what people have come to see -- sport.

"This will be the moment, and this will be the year, when I set myself apart from other athletes in the world," 25-year-old Bolt told the Guardian newspaper.

Bolt, who holds the world records for the 100m and 200m, is aiming to achieve what no other man has ever done before - successfully defend the 100 and 200 titles.

He is one of more than 16,000 athletes warming up for their big day at venues across Britain, and 11 million visitors will follow each twist and turn of intense battles for the ultimate prize - Olympic gold.

In host city London, basking in sunshine after a rainy summer, authorities went ahead with unpopular lane closures to keep the roads, and hundreds of thousands of extra visitors, moving, and security has been beefed up to protect the Games.

Counter-terrorism chiefs have played down the possibility of a major attack, although in a possible sign of pre-Games jitters, a Typhoon fighter jet was scrambled to intercept an aircraft that had flown into restricted air space.

Communications with the plane were restored, however, and the fighter told to stand down, the defence ministry said.

One target of anger among notoriously grumpy taxi drivers and many ordinary Londoners are the so-called "Games lanes" which came into operation on Wednesday.

Anyone caught straying into the lanes without permission faces an automatic 130 pounds ($200) fine, and there has been confusion and heavy traffic in several parts of the capital as a direct result of the system.

"They've closed off the Games lane, but nobody (from the Olympic community) was using it," said Ross Keeling, a call-out engineer, speaking after he travelled from east London to the city centre.

"My journey usually takes me 40 minutes, but it took two hours with the change. It was a pain in the neck. We just have to sit and watch the empty lane."

The threat of delays at Heathrow and other airports was avoided, however, when border guards called off a strike planned for Thursday.

Culture and Sport Secretary Jeremy Hunt announced this week that 1,200 extra soldiers had been deployed to protect Olympic venues at the last minute to cover for a shortfall in private security guards in a major embarrassment for Prime Minister David Cameron's administration.

The presence of courteous, smiling troops at the Olympic Park has in fact proved highly popular among athletes, reporters and officials.

Also attracting the cameras were Syria's athletes, who put aside the increasingly violent civil conflict engulfing their country on Wednesday to sign a "truce wall" at the Olympic Park and raise their flag.

The symbolic Olympic torch, nearing the end of its 8,000-mile journey, on Wednesday visited Wembley Stadium, scene of England's only football World Cup triumph in 1966, and was carried by the goalkeeper in that match, Gordon Banks.

The torch's odyssey ends with the lighting of the Olympic cauldron on Friday evening before 60,000 spectators including Queen Elizabeth, U.S. First Lady Michelle Obama and a host of celebrities and dignitaries.

Another one billion people are expected to tune in around the world for the ceremony directed by film-maker Danny Boyle.

While many details of the show have leaked through the media and social networking sites, some secrets remain, notably the identity of the person who will light the flame and even the location of the cauldron.

It has been widely reported that the show will feature idyllic scenes of pastoral Britain, references to the "Satanic mills" of its industrial past and nods to its place on the modern international cultural stage.

At rehearsals this week, crowds cheered the complex and distinctly British ceremony, which will be in stark contrast to Beijing's more choreographed extravaganza.