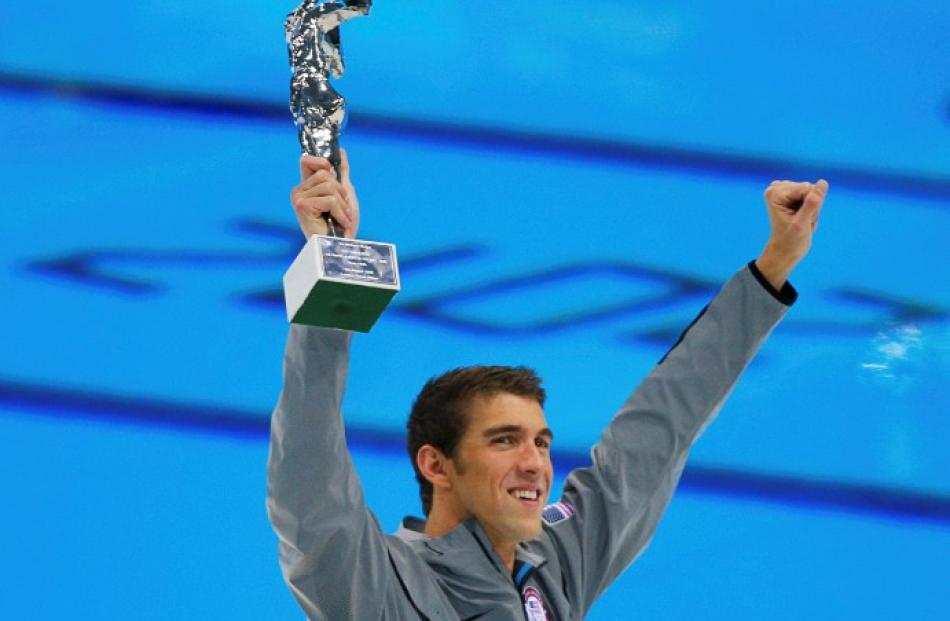 US swimmer Michael Phelps holds up his award recognising him as the most decorated Olympian at the Aquatics Centre in London. REUTERS/Brian Snyder

Swimming's governing body presented Michael Phelps with a special statuette on Saturday with a silver plaque on the base hailing "the greatest Olympic athlete of all time."

The winner of 18 Olympic golds, and 22 medals in total, smiled, almost shyly, as he addressed the subject of greatness after the last competitive race of his career at the London Games.

"It's kind of weird looking at this and seeing 'The greatest Olympian of all time'," he told reporters after putting in one last, immense performance in the pool to help the U.S. team secure gold in the 4x100 medley relay.

"When I was in the warm down pool, I said to (coach) Bob (Bowman): 'You know, I looked up to Michael Jordan my whole life because he's done something that nobody else has ever done and he's the greatest basketball player to ever play the game.'

"And I said 'I've been able to become the best swimmer of all time'. I said 'We got there together'. And I thanked him."

When the American finally stepped out of that pool, coach Bowman aired a grievance.

The man who took a hyperactive kid from Baltimore, Maryland, and turned him into a global phenomenon capable of feats no other human being has ever achieved, told the 27-year-old that he had not played fair.

"I said 'What's not fair about it?'," Phelps told a packed room of reporters hanging on his every word.

"And he goes: 'You were in the pool". I was like: 'Yeah, my tears can hide behind my goggles. Yours were streaming down your face'."

The accolade of greatest ever Olympian will be argued over for as long as the Games remain in existence, but governing body FINA had made their minds up.

The trophy was presented by the body's Uruguayan president Julio Maglioni as a surprise, although it cannot have been much of one given that the crowd were told to wait for a very special moment.

They listed his achievements, the medals and the Games attended.

FINA had also given Phelps a special trophy in Beijing four years ago when he became the first swimmer to win eight golds at a single Games, beating compatriot Mark Spitz's 1972 record of seven.

"Tonight was a very emotional night for Bob and I," said Phelps, who threw his bouquet of flowers to his mother in the stands and took a small U.S. flag from her in return.

He and his team mates unfurled a banner declaring 'Thank You London' as they posed poolside in front of a crowd with signs of their own declaring 'Phelps Phans Phorever' and "Phelps We Will Miss You."

Phelps had gone through his normal pre-swim routine and he left the Olympic pool for the last time by gliding over the ropes to the side, slipping out of the water and removing his goggles.

Then he hugged his team mates before standing, for the last time, with hand on heart to the anthem on the podium.

His greatest tribute was to Bowman, however.

"I wouldn't be here today without everything he's done for me. And I love him to death and am thankful I have somebody who cared so much for me and has put up with all of the crap I've given him over the last 15 years.