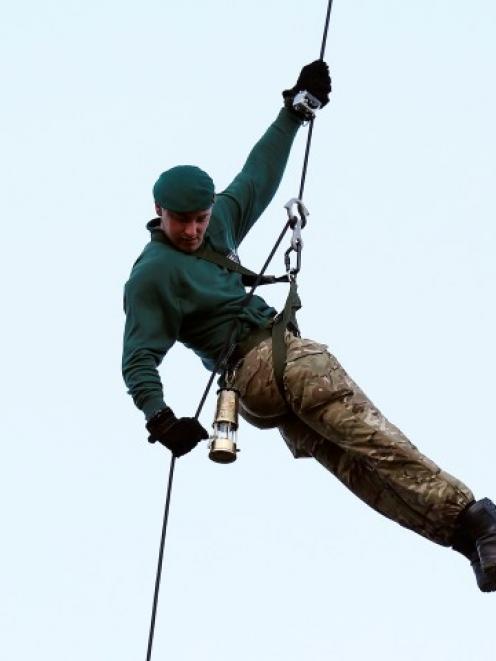 Royal Marine Martyn Williams carries the London 2012 Olympic flame inside a lantern as he abseils from a helicopter at the Tower of London. REUTERS/Suzanne Plunkett
The Olympic torch has arrived in London by Royal Navy helicopter to spend the night in one of Britain's most secure sites ahead of its week-long journey around the capital, culminating in the lighting of the cauldron at the main stadium in a week's time.

A Royal Marine Commando abseiled into the Tower of London, which dates back 1000 years and is one of London's most popular tourist attractions on the River Thames, at 2012 local time.

The flame will share the same security as the Crown Jewels used for royal coronations.

"The Tower of London really is the gateway to London so it is really appropriate that the flame spends its first night here securely in the Jewel House with the other things that are important to the nation, the crown jewels," Richard Dannatt, constable of the tower and a former British Army commander, told BBC television.

It was carried along the castle's ramparts by double Olympic middle-distance gold medallist Kelly Holmes.

Yeoman warders, or beefeaters, dressed in the their famous red and gold uniforms stood guard.

Aerial shots showed Tower Bridge and its giant Olympic rings in the background as well as the tallest building in western Europe, the Shard.

Significant numbers are expected to turn out to see the flame during its tour around London which will take in palaces, religious, political and royal landmarks.

Organisers hope it will draw attention away from recent damaging headlines including a botched private security recruitment drive, wet weather, transport glitches and the threat of strike action by border officials and train drivers in central England.

London mayor Boris Johnson said London was as well prepared, and possibly more so, than any other Games at this stage.

"I think what you are seeing now is the kind of last-minute jitters, if you like, before the curtain goes up," he told BBC television.

"I think what is going on, it's a sort of last opportunity for pessimism and doubt and Olympo-scepticism which we need psychology to legitimate and intensify the enthusiasm that is going to break out next week."

An estimated 10 million people have turned out to watch the flame since it began its journey on May 19 at Land's End, the most southwesterly point of mainland England.

Athletes, celebrities and people chosen for their community work have carried the torch along much of the 8,000-mile (12,900 kms) journey around Britain and northern Ireland.

It has been taken to Wales' highest mountain, been ferried across the River Mersey in northwest England and also visited Dublin on a rare trip outside the United Kingdom.

The disruptions and political demonstrations seen four years ago ahead of the Beijing Games have been absent from the 2012 relay.

Early on Saturday, the flame will travel through the Meridian Time Line in Greenwich, and the royal park where the Olympic equestrian events will be held.

Former gymnast Nadia Comaneci and basketball player John Amaechi will take it to the roof of the North Greenwich Arena, the venue for gymnastics events and basketball finals.

Later in the week, it will go to the steps of Christopher Wren's 300-year-old domed St Paul's Cathedral, and the stage of Shakespeare's Globe theatre.

It will also appear in Downing Street, the official residence of the prime minister, and Buckingham Palace, the central London home of Queen Elizabeth.

On its final day, the relay will start at Hampton Court Palace, made famous by Henry VIII, and its winding hedge maze, before being carried down the River Thames on the royal barge Gloriana, used in Queen Elizabeth's celebrations last month to mark her 60 years' reign.

It will arrive at Tower Bridge at about midday and then reappear later in the evening at the Olympic Park in east London where it will light the cauldron during the opening ceremony to start the Games.