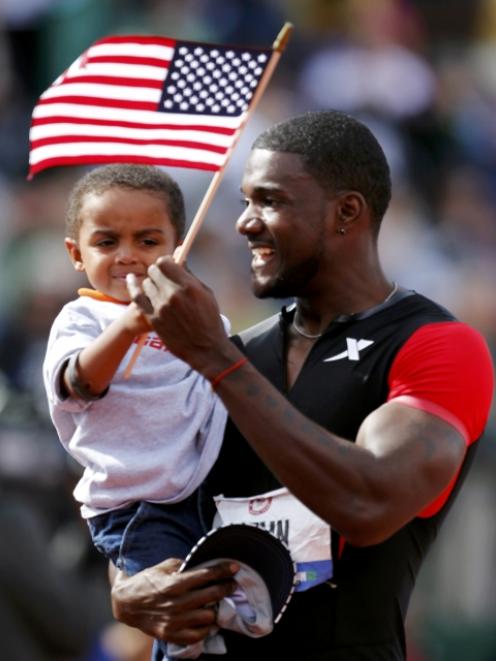 Justin Gatlin hands his son Jace a US flag as he celebrates winning the men's 100m during the US Olympic Trials in Eugene, Oregon. REUTERS/Robert Galbraith
Justin Gatlin is back. So is Tyson Gay.

Eight years after winning Olympic gold and two years after concluding a doping ban, Gatlin has secured his return to the Games by running an eye-catching 9.80 seconds to win the 100m at the US Olympic trials.

Gay, coming back from hip surgery after nearly a year off the track, also looked ready to take on the world's best in London as he clocked 9.86 for second.

Ryan Bailey claimed the third spot in 9.93 while 2008 Olympic bronze medallist Walter Dix finished last in 10.95 as leg problems continued to hamper him.

The splashy sprint came after LaShawn Merritt and Sanya Richards-Ross had delivered the fastest 400m times of the year.

Olympic champion Merritt, who has also served a doping ban since his Beijing triumph, romped home in 44.12 seconds to defeat collegiate winner Tony McQuay and Bryshon Nellum, who four years ago was shot in both legs.

Athens Olympic champion Jeremy Wariner was a well-beaten sixth in 45.24.

Not to be outdone by the men, former world champion Richards-Ross breezed home in 49.28 seconds in the women's race.

In the field, Reese Hoffa popped the longest shot put of the outdoor season to pace the always tough squad for the Games.

Surprise 2008 gold medallist Brown Trafton dominated the discus, closing out the competition with a throw of 65.18m.

The trials select the US team for the London Games and only the top three finishers in each event book a spot provided they meet the qualifying standard.