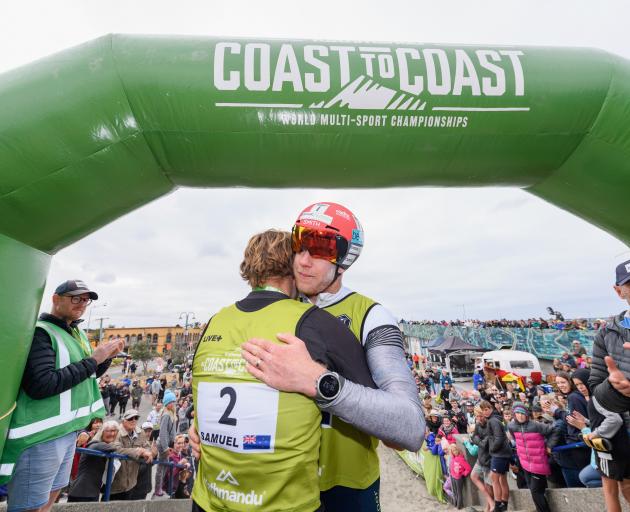 Dougal Allen (right) congratulates winner Sam Clark at the finish line. Photo: Getty Images
There were tears and heartbreak for Wanaka’s defending world champions of multisport in the Coast to Coast Longest Day on Saturday.

Dougal Allan and Simone Maier had a day they would like to forget.

Allan was competitive in the first cycle stage but struggled on the 33km alpine run, allowing Whakatane’s Sam Clark to steal an 8min lead. Clark’s relentless pace proved too much to overhaul, as both finished with personal best times on the 243km course. Clark clocked 10hr 45min 1sec to Allan’s 10hr 52min 43sec for second.

A torrid pace was set in the women’s race with triathlon convert Alison Wilson not stopping despite a dunking on the first river crossing in Deception Valley during the alpine run.

Maier still appeared confident in overcoming the first-timer and was beginning to haul in her lead when she struck gear trouble on the 67km kayak stage down the Waimakariri River and had to withdraw.

Allan summed up the emotion invested in the event.

"I sort of expected a lot more from myself today but I just couldn’t put it together. The legs were a little bit flat in the middle run. Tried to pull it back in the middle ride. Felt good in the boat but fell out, which is something that hasn’t happened for about 12 years," he said.

‘‘I just kept believing and pushing. I think my preparation was better than my performance on the day and that is going to hurt for a while. It just felt like I was forcing it and it just wasn’t coming naturally. And that’s disappointing.

‘‘Clarkie was away off the front all day, and I just couldn’t respond.”

‘‘It’s going to be another 12 months before I can use this fitness again. I’d like to think it was a pretty exciting race for people to follow and if I played a part in that, then that is some consolation.”