Children play next to a mural in Darlington, England, dedicated to British US Open winner Emma Raducanu.
The week that wasn’t

It was going to be great, wasn’t it?

The All Blacks and Springboks at Forsyth Barr Stadium. The 100th test. A century since the first clash at Carisbrook.

As Jerry Maguire said, we live in a cynical world. A cynical. World.

But this was not going to be a week of lamenting the fading of a rivalry or the commercialisation of sport, or analysing the Silver Lake deal or the merits of giving Ian Foster a contract extension, or complaining about ticket prices.

It was going to be a wonderful week of fun, friendship and footy.

Covid has changed everything. People have died, businesses have been wrecked, lives have been messed up in unimaginable ways. Sport, in the scheme of things, is not that important.

But we can still be grumpy that our test is being played in Townsville tonight. 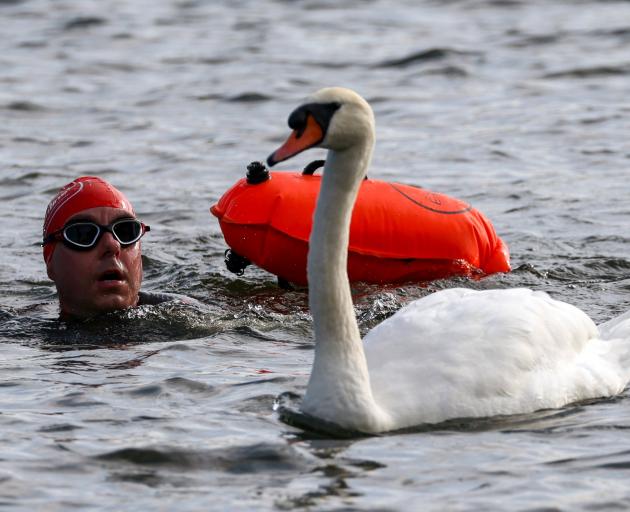 A participant swims next to a swan during the Children with Cancer UK Swim Serpentine in the Serpentine in London.PHOTOS: REUTERS
Belated bad news

The Last Word has been in paradise (Oamaru) and purgatory (editing the letters page JOKING, BOSS) for six years, so is still catching up on some things in the sporting world that passed him by.

He was shocked — as in, jaw to the ground — to learn all games at the 2022 Women’s Rugby World Cup, one of three world cups being held in this country in the space of 18 months in a seismic time for women in sport, are being played in Auckland or Whangarei.

You what? When and how was this monstrous decision made? Why has there not been greater public outrage?

Cricket and football world cup games will at least be spread around New Zealand. But rugby has blown this one.

We have lost the war.

The MCC, guardian of cricket, has officially amended the laws of the great summer sport to appease the hand-wringing wokesters ... er, move towards a wonderful era of inclusivity.

Yes, it’s finally happened. The term ‘‘batsman’’ is to be erased, if not classified as hate speech at least to be replaced by the neutral but awful baseball term ‘‘batter’’.

The use of gender-neutral terminology ‘‘helps reinforce cricket’s status as an inclusive game for all” apparently.

It’s not a hill I will be dying on. ‘‘Batter’’ (bleccch) has been encroaching in recent years anyway. The world is changing rapidly, and sometimes you just have to shrug your shoulders.

But I do find it mildly sad, and wonder if the theory that using ‘‘batsman’’ has been preventing females taking up cricket is just a lot of nonsense.

Grace Nweke is a talented young netballer, and it will be exciting to see her develop.

But hearing her described as the first Silver Fern of African descent this week was a bit of a head-scratcher.

In case you needed reminding, New Zealand’s greatest netballer was born in Vereeniging, in the South African province of Gauteng.

Irene van Dyk played 145 tests, so she was hard to miss.

Another to hail from Africa was Leana de Bruin, who played 104 tests for the Silver Ferns.

The New Zealand Breakers did the right thing by cutting ties with anti-vaxxer Tai Webster, who seems to be the first — but likely won’t be the last, unfortunately — Kiwi sportsman to lose his job because of a seriously misguided belief system.

I almost feel sad for Webster, who is a wonderful player and could be a fine young man, for all I know.

Just a shame he has either been watching YouTube morons or influenced by his rabbit hole-dwelling brother, Corey.

I have zero respect for anyone choosing not to get vaccinated. That is an objectively dumb choice.

Time to stop sighing and say some really positive things! Journalists don’t always focus on the negative stuff, you know!

If you are a sports fan, you will obviously see the Otago Daily Times as your first port of call for news and unique stories and columns that aren’t at all trivial.

But I might suggest you add at least one handy app to augment New Zealand’s finest paper.

Tribe is a life-changer.

I don’t know much about it — who started it, how it works — but it is astonishingly good.

Basically, it provides a one-stop shop for results, standings and live updates for teams and competitions, from the elite all the way down to schoolboy rugby.

You choose which teams/competitions to follow, and it is just a beautifully accessible way to keep track of things.

It’s free, but you might consider — after you have paid your ODT subscription — making a donation to keep the app going.

Batter is what pancakes are made of.