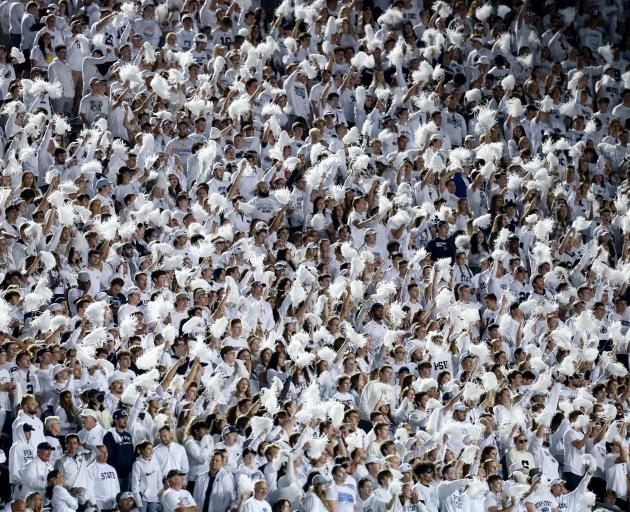 Members of the Penn State student section cheer their team against the Indiana Hoosiers in Pennsylvania on Tuesday. PHOTO: USA TODAY
Rugby roundabouts

Those who know me well will have heard all this before.

I much, much, much preferred the old NPC, the jewel in the New Zealand rugby crown.

It just made so much sense. Three divisions, automatic promotion-relegation, boom.

You could aspire to move up a division — North Otago, for example, leaped from the third division to the semifinals of the second division, roughly making the Old Golds the 13th to 14th-best team in the country, or the equivalent of a place in the modern NPC — but you would also be punished if you were rubbish.

Schedules were very simple — you played every team in your division once, and the season ended with the top four playing semifinals and then a final, and you knew exactly what it was you were playing for. 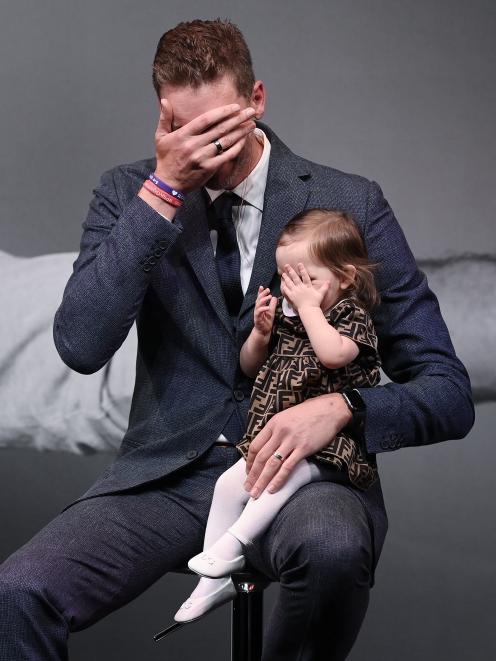 Basketball great Pau Gasol shares a joke with daughter Elisabet as he announces his retirement in Barcelona on Wednesday. PHOTO: GETTY IMAGES
Now? It’s a bit of a mess, and I say this as someone who really loves the Heartland Championship, and regularly points out North Otago has won three Meads Cups.

There is no pathway — the Old Golds can win as many titles as they like but can never be promoted.

There is no proper threat of relegation — your Stags or your Steelers or whoever can finish dead last in the faux second division but never be booted out.

And it is endlessly confusing. I have not met a rugby fan yet who can immediately name which seven NPC teams are in the Premiership and which are in the Championship, nor one who can explain how the draw works.

I wonder if this year could be another hint that this competition needs to change.

Covid has effectively wrecked the NPC, and it has been mildly bewildering to see New Zealand Rugby clinging on to the faint hope that it could be completed with some level of legitimacy.

Just give the young blokes who are not on the Covid frontline a couple more games to run around, write this season off, and bring back the NPC as it worked so well.

Dennis Radford, one of the great figures of Otago tennis and the former long-serving ODT tennis writer, shared this story.

‘‘A doubles partner of mine, and a leading Otago tennis player for a number of years, Grant Webb, had an uncanny resemblance to Wilding, and played him in a movie which played on television, I believe. This could have been about 40 years ago.

‘‘I know this because he used a racquet that my father owned, and which was passed on to me. It would now be over 100 years old.

‘‘Webb tragically died at the age of 39 while coaching and playing in Germany after he contracted a disease believed to have come from infected meat.

‘‘He was a superbly fit athlete and his feats included running a marathon somewhat under three hours, as I recall. He was a spectacular attacking player, whose best was brilliant, but who was also prone to errors.

‘‘Grant’s job, before heading overseas, was as a researcher for a sports’ documentary programme on television so he probably had the inside running for the part.’’

Here is a nice yarn out of the B grade of Dunedin ice hockey. Most of it might even be true.

There is a team called the Bombers, see, coached by Dunedin Thunder squad member Charlie Lilly.

The Bombers, well, bombed at the start of the season. They were smashed 8-1 by the rival Falcons in the opening game, and failed to score a goal for the next four games.

Needing to win 10 of their remaining 11 games, the Bombers duly went on a long winning run, qualifying fourth for the semifinals, and winning on a penalty shootout.

So, to the final. And, wouldn’t you know it, the Falcons await.

The Bombers trailed 3-1 heading into the final period and all looked lost. But captain David Lawrie stepped up to score two goals, the Falcons were pinged for having too many players on the ice, and the Bombers scored to win 4-3. Great stuff.

A young Auckland basketballer with impeccable southern heritage will dip her toes into the exciting world of college hoops next year.

Lilly Parke, of Baradene College, has committed to Auburn University (Montgomery), in Alabama.

Imagine playing 162 games in a season — then your record being wiped and everything coming down to a single game.

That was the situation that faced the Boston Red Sox and the New York Yankees, baseball’s greatest rivals, this week when they finished with identical records (92 wins, 70 losses) and had to play a tiebreaker game to progress to the playoffs.

Absolutely brutal, and kind of nuts. But the Red Sox won, so you won’t hear me complaining.

Only in France. A football club was knocked out of the Coupe de France because of a GPS mix-up.

Tarbes, a sixth-tier club, was drawn to play Vabres, in southern France, in the fourth round.

But the team’s bus driver missed a letter when he keyed in the destination, and the team ended up in Vabre — 90km away — just as its game was about to start.

By the time the Tarbes players got to the right place, it was halftime, and they had been disqualified.