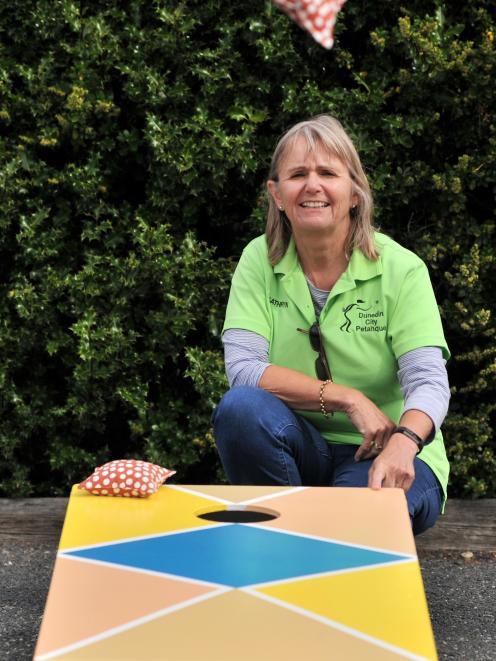 Dunedin City Petanque member Cathryn Lyall watches a bag in a game of cornhole at the Dunedin City Petanque Club. Photo: Christine O'Connor
It is said to have come from Germany, perhaps an Indian tribe in the American midwest or from some farmyard in the United States.

But wherever it started, it has now landed in Dunedin. Cornhole is part of the 2020 Masters Games in Dunedin and is proving popular as more than 70 competitors are willing to give the event a try.

Cornhole, which also goes by many other names, including bean bag toss, involves competitors throwing a bag full of corn at a board with the aim of getting the bag through the small hole in the board.

One of the organisers of the cornhole Masters Games event, Stefany Frost, said she was surprised to get so many entries but it was not hard to see why.

It was a very even game and anyone could be good at it. The game was exciting and required a reasonable amount of skill, she said.

As it is from the United States, the game is conducted on the old imperial measurements.

Players had to be 8.2m (27 feet) from the board when they throw their corn bags which are made of duck cloth and full of corn.

The bags need to go through the round hole — measuring 15cm (6 inches) — to score points —the first to 21 points is declared the winner.

To get the bag through the hole is three points while on the board is just one point.

Players only get points allocated to them if they outscore their partners.

The Games event is taking place at the Dunedin City Petanque club and Frost said the club had to get the 20 boards made for the event.

She was hopeful the sport would become popular and the boards and bags would be used after the Games event for anyone else interested.