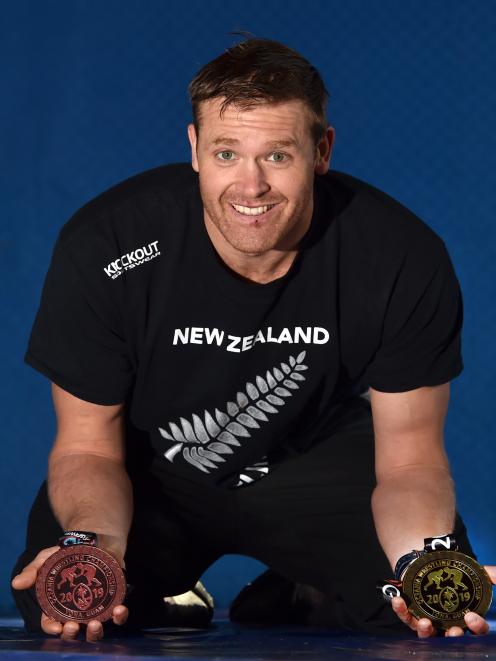 Joe Dobson at the Combat Sports gym yesterday after winning two Oceania Championships wrestling medals less than a year after taking up the sport. PHOTO: PETER MCINTOSH
Joe Dobson has an impressive range of sporting achievements - but his latest might top the lot.

He recently returned from Guam, where he was one of three Dunedin wrestlers - Solomon King and Sam Harrison were the others - to claim Oceania championship medals.

That consisted of a gold in the 97kg Greco-Roman class and a bronze in the freestyle.

It was an impressive result, especially given he took up the sport only eight months ago.

Upon hearing the national championships were to be held in Dunedin last year, he asked whether he could get involved.

Having just finished building his house -which he had taken a break from competitive sport to do - he was looking to get back into something.

"The footy season had finished and wrestling came up. It just meets that need for combat.

"You have that inherent need to push yourself."

He had three weeks to get up to speed and to lose 7kg.

Whatever he did clearly worked, as he walked away with a pair of national titles.

A member of the Combat Sports club, he continued training with coach Caleb Steven.

He applied for the New Zealand team and took several trips to Rangiora which included the chance to train with All Blacks Joe Moody, Owen Franks and Luke Romano.

That was enough to prove himself to be chosen for the New Zealand, less than a year after beginning the sport.

His goal is now to make the Olympic qualifiers.

While wrestling was still relatively new to him, his wide-ranging background in sports was helping him along.

A member of the New Zealand under-15 and under-16 rugby squads, he returned from knee reconstruction and played more than 50 premier games for Dunedin.

During his time off rugby, while recovering from his knee injury, he took up both rowing and surf life-saving. He won national rowing titles with Dunstan High School and went on to claim IRB national titles with the St Kilda Surf Life Saving Club.

The javelin also featured for a while and, more recently, orienteering has entered the picture.

A fireman for the past eight years, he works shifts, which had begun to make fitting rugby in more difficult.

However, a builder by trade, he began to build the house he now lives in with wife Sally and children Angus (6) and Della (4).

Time became a commodity and the prospect of getting injured also became more serious.

Something had to give and he decided to stop playing rugby in 2015.

Now that the house was finished he was enjoying being back in competitive sport.

It was something he hoped to attract more people to and said other rugby players might be among those who would enjoy it - although he added it was sport anyone could have a go at.

"I think a lot of ex-rugby players would be good at it, especially front rowers.

"I used to love scrummaging and it's just like having a scrum for six minutes.

"It's that intense and that fun, that sort of dynamic movement.

"It would be really cool if we could get a few more bigger bodies."