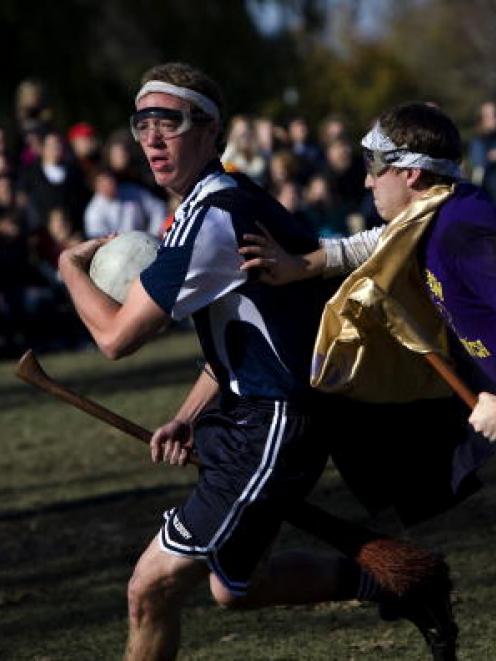 A player from Middlebury College rushes past a player from Emerson College in an Intercollegiate Quidditch tournament in Middlebury, Vermont. (Photo by Christopher Capozziello/Getty Images)
Quidditch players riding broomsticks have tagged on to the Olympics, acknowledging the game adapted from the Harry Potter series was for nerds but arguing that it was a legitimate sport worthy of being in the Olympics.

Five teams of quidditch players from Britain, the United States, Canada, France and Australia, flew into England for the sport's first major international tournament and to hold an exhibition match as the Olympic torch passed through Oxford, 95km northwest of London.

The sport of ground quidditch was adapted in 2005 by U.S. students at Middlebury College in Vermont from the flying broomstick game in J.K. Rowling's Harry Potter novels.

Since then, the sport has spread to 25 countries and has some 700 teams, mainly based in the United States and largely at colleges and universities.

Alex Benepe, one of the sport's founders, set up the New York-based non-profit International Quidditch Association in 2007 as players started to take the game more seriously and quidditch now boasts a rule book and a World Cup.

He said players happily admitted they were nerds, but sporty nerds, and they wanted to prove this was now a legitimate sport - and even aim for the Olympics in the future.

"Most people who play are nerds but we have a lot of jocks or athletes playing this sport as well, some of whom have never even read the Harry Potter books," Benepe, dressed in a three-piece suit and top hat, told Reuters.

"We thought it would be a great time to piggy-back off the Olympics, being held in the home country of Harry Potter, and show people this is an exciting sport. There are a lot more ridiculous sports in the Olympics than quidditch."

The International Quidditch Association describes itself as a magical, non-profit body "dedicated to promoting the sport of quidditch and inspiring young people to lead physically active and socially engaged lives".

Players said they were attracted to the sport as it drew in like-minded people who loved reading but also sport.

"Quidditch has helped athletes who had to be in closet about their nerdiness," said Benepe.

Allison Gillette, a player on the U.S. team which won the international tournament, said quidditch was as physically demanding as rugby and just as competitive but it retained a humour and camaraderie that other sports often lacked.

She said players were often teased but their tormentors changed their minds when they saw it was such a tough game.

"It is very physical but somehow having to run with a broom between your legs is humbling and this keeps a great sense of community in the sport," Gillette, a student from Emerson College in Boston, told Reuters.

Quidditch is best described as a mix of rugby and dodge ball. Each team has seven players and uses three different balls. Every player must have a broom between his or her legs.

Three players on each team are called chasers who aim to score goals through a hoop, worth 10 points each. Two players are beaters who use dodge balls, or bludgers, to disrupt the game. A keeper defends the hoop. The seeker's role is to snatch the snitch which is worth 30 points.

The snitch is a tennis ball in a yellow sock tucked into the waistband of a snitch runner who is not on either team, does not use a broom and can use any methods to avoid capture.

Benepe, who works in marketing in New York, said the game had changed since 2005. The cape once worn by players was ditched as it could choke people and the rules were now clearly set out.

"It has become far more serious and its growing popularity in the last year or two has really increased the quantity and the quality of players and improved the game," he said.

British player Angus Barry, who is studying Philosophy, Politics and Economics, at Oxford University, said five official teams had emerged in Britain in the past year and there were another 10 or so playing that did not join tournaments.

"The Harry Potter aspect is there but it is not an essential part of the sport. The sport would not have survived if it was just about Harry Potter. It stands on its own," said Barry.

Spectators looked on with amazement as the players, some wearing goggles, rode their brooms across the field.

Not all were convinced quidditch would make the Olympics.

"It's alright but it's a bit weird," said 10-year-old Tom Bound from Oxford, a Harry Potter fan who was hoping - in vain - to see some of the stars of the film series at the match.

"I don't think it's for the Olympics. It's probably better when the broomsticks actually fly," added his mother Emma Bound.