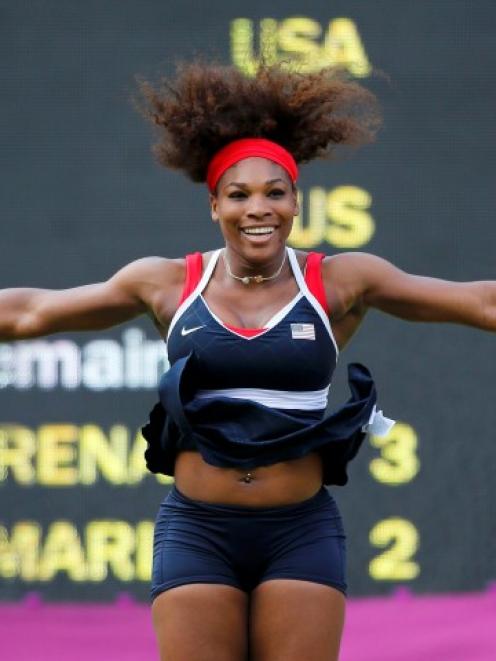 US tennis player Serena Williams celebrates after winning the women's singles gold medal match against Russia's Maria Sharapova at the All England Lawn Tennis Club. REUTERS/Mike Blake
Serena Williams has demolished Russia's Maria Sharapova 6-0, 6-1 to grab Olympic tennis singles gold, becoming the first player in the sport to win all four grand slams and an Olympic title in both singles and doubles.

Having completed the career "golden slam", the unstoppable American, who dropped just 17 games in her six Olympics singles matches, is now making plans away from tennis.

"I've won everything. Now I can go to Disneyworld," said the 30-year old, laughing.

"I did something nobody's done. So I'm really excited about it. I haven't even had time to think about it."

Williams, who won her fifth Wimbledon singles title on the same court less than a month ago, took just over an hour to wrap up her win over number three seed Sharapova, securing the victory with a powerful ace.

It was the most one-sided women's singles final in Olympic tennis history, beating the previous record for the fewest games set by France's Suzanne Lenglen when she defeated Britain's Dorothy Holman 6-3 6-0 in Antwerp in 1920.

Sharapova, making her Olympic debut, was happy just to go home with a medal.

"She was just too quick and too powerful today," said the Russian, who had also been bidding to complete the rare singles golden slam, a feat only achieved by Steffi Graf, Andre Agassi and Rafa Nadal.

"To leave with a silver is an amazing accomplishment. Obviously, it's always disappointing to lose in the finals, but it's great to get a medal, that's for sure," she said.

Earlier her team mate Maria Kirilenko lost out on the bronze to world number one Victoria Azarenka of Belarus, who defeated the Russian 6-3 6-4 to win the country's first ever tennis medal.

Serena and sister Venus are hoping to break another record by becoming the first tennis players to win four Olympic gold medals. They take on Russia's Kirilenko and Nadia Petrova in the women's doubles semi-finals later.