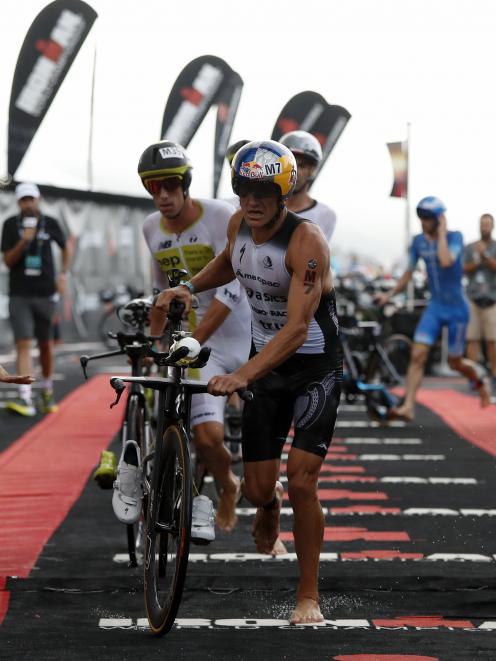 Braden Currie at Kona. Photo: Getty Images
A blistering marathon was not enough to overcome a slow bike leg for Braden Currie.

The Wanaka athlete reeled in more than a dozen competitors, but ultimately his time of 8hr 8min 48sec left him seventh at the Ironman World Championship in Kona.

The German finished nearly 9min ahead of second-placed Tim O'Donnell.

Sebastian Kienle was third to make it two Germans on the podium.

A superb swim left Currie in the lead group coming out of the water. However, he did not have the legs to stay with the pace set by Alistair Brownlee and then Frodeno on the bike.

Despite battling wobbly legs in the searing heat, Currie responded with a 2hr 46min 25sec marathon.

"That was maybe just a little too late at the end there," Currie said.

"I am not sure what happened on the bike. I had a fantastic swim and was super comfortable and where I wanted to be but just couldn't hang in there.

"Jan kept pushing so hard to keep away and kept doing that all day. The bikers came through and I couldn't hang in there either, and ended up in no-man's land.

"I progressively lost time but to be honest, I am super proud.

"I dug really deep on that run.

"I could quite easily have given up. It wasn't where I wanted to be on the bike and in the end I end up seventh.

"That is all right. It is pretty good.

"I really struggled that first five minutes, but I just had to dig deep and once I found some rhythm and started getting away from some people I came right.

"To be honest, last year was great, but I had to go deep for that one and had to do it by myself which is quite cool."

The only other Kiwi in the pro field was Mike Phillips, who struggled for pace through much of the day.

He emerged from the water at the head of a chase group and could not make an impact on the field, coming home in 39th place in 9hr 5min 29sec.

The women's race was won by another German, Anne Haug.

It was her first win in Kona, while Lucy Charles-Barclay and Sarah Crowley also claimed podium spots.