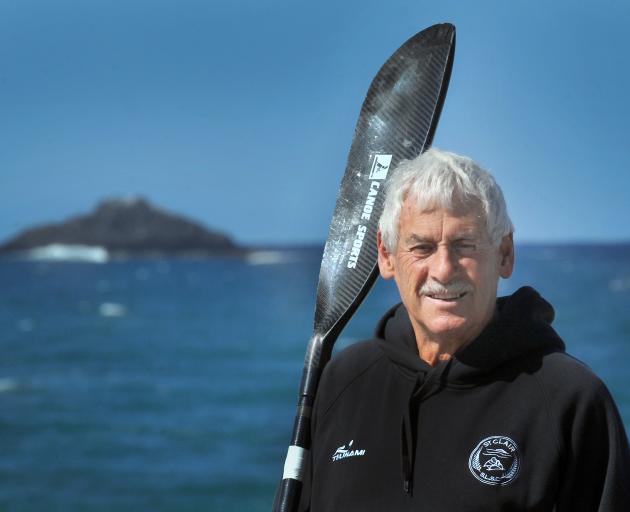 Bart Smaill gets ready to race in the White Island race on Saturday from St Clair Beach. PHOTO: CHRISTINE O'CONNOR
Bart Smaill was there 50 years ago and will be back again on Saturday.

Two men who grew up with the white sands of Dunedin's St Clair beach as their playground are set to compete in the gruelling annual race from the beach to White Island, 50 years after one of them completed the inaugural race in 1969.

Bart Smaill (80) and John Bryant (55), have entered a double surf ski in the 5km race to the island and back this Saturday.

The race is considered one of the toughest events on the surf life-saving calendar because of the extreme southerly conditions which usually prevail.

An inflatable rescue boat will accompany the pair to the island and back.

Smaill says he is in good physical shape and just because he is 80, that does not mean he should give up on a sport that has been part of his life since he was a young boy enjoying St Clair beach.

Smaill had surgery to repair a heart valve in August. That followed stents in 1996 and 2009 and a quadruple heart bypass in 2010. He also has his appendix removed last year.

"The health system is getting hammered by me,'' he said.

His daughter-in-law is a consultant at Dunedin Hospital and had given him the go-ahead, provided conditions were right.

Smaill said while they had formally entered the race, they might pull out if conditions were too bad.

Smaill is a life member of St Clair and Bryant was a club member until 1991 when he headed north.

He is now head coach at the Mt Maunganui Lifeguard Service, near Tauranga.

Bryant grew up in Dunedin and Smaill was an inspiration to him and many other young surf life-savers.

"He was a mentor to me and everyone wanted to be like Bart Smaill. It would be a real privilege to paddle with him.''

He said conditions would have to be right, a surf of about a metre and relatively flat sea.

Bryant said Smaill jumped at the chance when he approached him earlier this year.

Smaill was on a single surf ski for the first race in 1969.

In a dumping surf, a choppy sea and a heavy surge between the island and the rock to the south, he was third competitor home in a handicap time of 43 minutes and 10 seconds.

In the infamous race of 1974, when most competitors struggled because of the horrendous conditions, Smaill was in the St Clair four-man canoe, one of only four competitors to make it around the island and back to the beach.