Sport in region to gain boost from trip 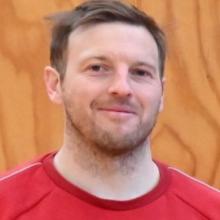 Eoin Murray
A successful foray into the international arena will be a boost to Dunedin's young handballers.

Its large girls contingent has returned after competing well at the Oceania championships in New Caledonia.

Both teams competed well and assistant coach Eoin Murray, of Dunedin, said they placed about where they had hoped.

The country excelled at the sport, being an overseas territory of France, one of the sport's powerhouses.

Annalise Wilson starred in the under-17 side.

She was the team's second-top scorer and finished in the top 10 scorers.

Dunedin players made up the bulk of the under-19 team and all came together well.

Captain Sophie Gaudin, in particular, was to the fore, leading well both on and off the field.

Murray felt the players had improved markedly as the tournament progressed.

That was particularly significant as most had only begun playing within the past two years.

Indeed, the sport itself was relatively new in Dunedin.

"It was a big change in terms of pace. I think that was the big thing they hadn't seen before, the pace and intensity of international handball.

"Especially that New Caledonia team, who have some very good players and some of them will go on to play at a professional level.

"Any mistake the girls made was punished and they really learned from that.

"They were able to adapt to that and reduce the number of technical errors and sort of try to play our game plan against the other nations and it really showed."

He added they would help boost the quality of play in Otago on their return.

They will all be key players on the Otago teams that will travel to Wellington for national inter-regional championships in the first weekend of October.

The secondary school competition will begin in term four.