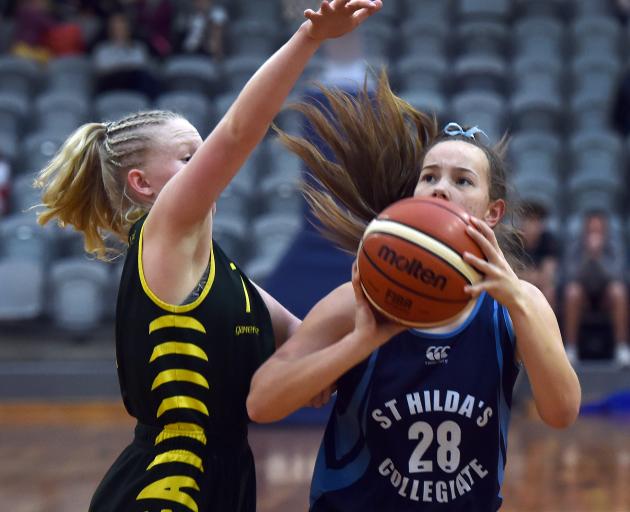 Chloe Edwards, of Waimea College (left), challenges as Jaymee Meffan, of St Hilda's, looks to shoot during the final of the South Island secondary schools junior basketball championships at the Edgar Centre yesterday. St Hilda's Collegiate was edged 59-54. King's High School was beaten 71-54 by Christ's College in the boys final. The tournament began on Saturday and attracted 43 teams from around the South Island. Photo: Peter McIntosh
These articles are compiled by the Otago Secondary Schools Sports Association  which is proudly sponsored by Perpetual Guardian.

The first XI hockey team had a very successful season, managing to stay undefeated throughout the regional senior reserve A grade competition and winning the final against Wakatipu 4-0.

The team then beat Mt Aspiring again three days later in the Otago co-ed final to set up a clash in Gore against Gore High School in the Highlanders co-ed final. Dunstran won that 31-29.

The girls A netball team was second in the Central Otago A grade conference.

One of the school's standout winter sports teams was the Kwik Sticks six-a-side hockey team which finished third in in its competition. The most valuable players of the season were Cassidy Bridger and Ben Carswel and the most improved player was Lilly Kemp.

The Wildcats netball team finished second in its competition after an unbeaten season which finished on August 15.

Staff, coaches and parents have been impressed by the newly formed girls rugby team this season. The side started with many players never having played before and quickly proved to coaches they were willing to get involved and improved week upon week.

The school entered a team in the national dodgeball championships last month and played extremely well to finish third in the mixed A pool. Player of the tournament was Ranah Herewini.

Outstanding athletes Abigail Paton and Jordyne Harris attended an Otago Academy of Sport talent accelerator workshop at St Kevin's College in Oamaru last month. The workshop focused on helping sports people get the most out of their sport by covering sport nutrition, mental skills and athlete life.

Hockey has been a real highlight for the winter codes. The senior A team beat King's High School in a thrilling final with a last-minute goal to win 2-1. The under-15 team beat the second XI for the first time this year to win the second division final 1-0.

Equestrian competitor Quinn Coutts has been competing successfully in Europe.

The school had another successful year at the SISS curling tournament in Dunedin. Four teams were entered and three of them gained placings. The girls team of Lucy Neilson, Zoe Harman, Anna Stuart, Reef Becker and Olivia Russell claimed gold, edging out Otago Girls' High School.

Lucy and Zoe have been named in the national under-21 women's team to travel to Finland in December. The mixed team of Fletcher Dowling, Ryan Shead, Zac Mackenzie, Harmony Devitt and Ashleigh Paul secured silver, losing only to Bayfield High School which won the competition.

These students had never curled together before and some had only been playing two weeks. The senior boys team of William Becker, Sam Flanagan, Ben Voice and Damian Carson received the bronze. Early losses meant the side slipped through contention for gold, but some close games were played.

Since the tournament, Lucy Neilson, Zoe Harman, William Becker and Sam Flanagan have also been shortlisted for the Youth Olympic Games team to travel to Switzerland in January 2020.

The school has ended its regular winter sports season successfully, performing exceptionally well in all sports across the board. Every senior first team in basketball, hockey, rugby and football made it to the final of their respective competitions.

In the senior football final, it was the King's first XI versus the Kings second XI, which illustrates the depth of football talent at the school. King's was runner-up in the junior final.

Below first-team level, King's 2nd XV won the final of the under-18 competition, beating West Otago RFC 5-0. The King's first XV was awarded first place for the ORFU sideline standards initiative which gained it a trip to Highlands motorsport park for a day.

In both the senior and junior basketball finals, King's will play against arch rivals Otago Boys' High School.

King's will be sending eight teams away to various South Island and national tournaments during tournament week. King's has placed extremely well in recent years.

Teams are competing in tournament week with boys football in Dunedin and the girls hockey team and girls football teams travelling away.

Kieran Black, Nic Butler and Solly Armstrong have been selected for under-15 Otago hockey development teams.

Cole Brooks-Adams is in the Otago under-14 water polo team. The team won all its games against Christchurch and Invercargill in August. Cole will compete in the nationals in Tauranga in December.

The school's gold team was runner- up in the year 10 second division netball competition.

The combined girls rugby team was third in the rugby 10s division. Many of the girls took up rugby for the first time this year

Two curling teams attended the South Island championships in August. Both teams improved their skills against some of the country's top-ranked sides.

The Get 2 Go Challenge teams attended a kayak training session with Otago Polytechnic outdoor ed programme to prepare for the challenge in September.

With winter sports coming to an end, teams headed to semifinals and finals. Sixteen of the 20 netball teams competed in semifinals on August 17 and all will head into finals weekend either looking at 1-2 or 3-4 places within their grades. The senior A team retained its position in premier B by finishing third.

Rachael Pitts has been chosen in the New Zealand under-21 curling team to travel to Finland. The Curling Fries team of Emma Campbell, Ailie Muldrew, Rachael Pitts and Ella Williams was second at the SISS tournament.

The annual triangular exchange involving OGHS, WGHS and SGHS was held last month. This event enables some of the senior A teams to have extra matches against schools they would not normally compete against before heading away to winter sports week.

All the rugby and netball teams have had their last Saturday competition games.

The senior netball team was awarded the Alexandra Mums Cup for winning the D grade in round one. The A team was fourth in the A grade, and heads away to the SISS tournament in Nelson.

Ethan Kitto has been selected to play in the Otago Country under-18 rugby team. He and Brayden Whyte head to New Zealand Rugby Academy in Palmerston North for a week of games and training with the New Zealand Area School Team.

Jessamy Wales has been selected to attend the ESNZ young riders jump camp at MacLeans Island, Christchurch, in September. Coaches will be coming from Australia with only 30 riders selected.

The school cross-country will be held next week. Students compete for trophies and house points.

At the beginning of the term, the netball, hockey, badminton and debating teams headed to Timaru to compete in Winter Quadrangular Tournament. Finishing second-equal overall was a great result.

The first XV comprehensively beat Southland Girls' High School in a semifinal clash for the South Island championship in Invercargill. Danielle Ferguson scored four tries in the game. The team has just returned from Christchurch where it was unable to get past Christchurch Girls' to make the Top Four Nationals. In the weekly competition, the team beat Columba 27-10 to take the shield. The year 9 and 10 teams also finished top of their grades.

The hockey teams had some fine final performances last week. The first XI claimed the final against Columba in a penalty shootout while year 10 side won its section against Columba third XI 2-0.

Zara Geddes won the under-15 girls division at a recent duathlon competition.

The biggest win of the winter sports season went to the year 10A netball team, which has come through two years of competition with just one loss and is unbeaten this season. It capped its Otago and South Island wins with a win in the premier grade of the centre competition. The Rata team won its year 10 section and the Red team its year 9 section.

Finn McDonald-Page has been named in the Otago metro under-16 rugby squad. Paige Flett (girls), Nixon Burns (under-14), Lachlan Nicholl (under-15), and Trey Russell (first XV) were named most valuable players for their respective teams at the rugby awards night. Trey has also achieved national success by being selected to represent New Zealand in the under-18 boys touch team. Trey, the sport prefect, has had a stellar year and was also captain of the combined co-ed first XV.

As basketball wraps up, both the junior A boys and girls teams will contest the finals of their grades.