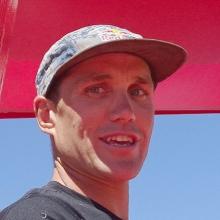 In a tightly fought run, Currie pushed hard through the final stages to take the title nearly 9min ahead of Mike Phillips.

Currie was towards the front of the pack all day, finishing the swim leg second to Smith.

Less than a second separated the three top male athletes — Smith, Currie and Mike Phillips — at the end of the bike leg.

Currie took the lead and dominated through the run.

"I knew it was going to be a tough run, I just had to do what I could do and stay consistent," Currie said.

"I had to grit my teeth at the 30km mark, keep the tempo up and stay in there.

"This race always means a lot and this result builds good confidence going into the year and focusing on world champs. I had my first win here on debut, this feels more solid," he said.

"It’s tough racing Ironman and it just gets tougher and tougher."

Final standings saw Currie take the title for the first time since his win on debut in 2017, followed by Mike Phillips then Kyle Smith.

Hannah Wells won her inaugural Ironman title in her own debut.

She emerged from the swim 5min behind leader Rebecca Clarke. Wells made up the time and more on the bike leg, taking a lead of more than 6min into the run and going on to finish nearly 14min ahead of Clarke.

"This means so much, I can’t even put it into words," Wells said. "Huge thanks to the organisers who have been through many changes, and to my sponsors and family.

"I had a plan and I wanted to stick to it, I just wanted to execute my best race. There were always going to be surprises and tough moments," she said.

"I had a rough swim and the second half of the marathon was tough but I’m really stoked to make it to the finish line. I’d like to have another go, I think I can do better. This event is amazing and hopefully I can compete in Cairns in June depending on travel circumstances."

After Clarke led the swim, Wells dominated the race, with Emily McNaughtan maintaining a steady pace and finishing third.