Weatherall out to raise awareness of mental health 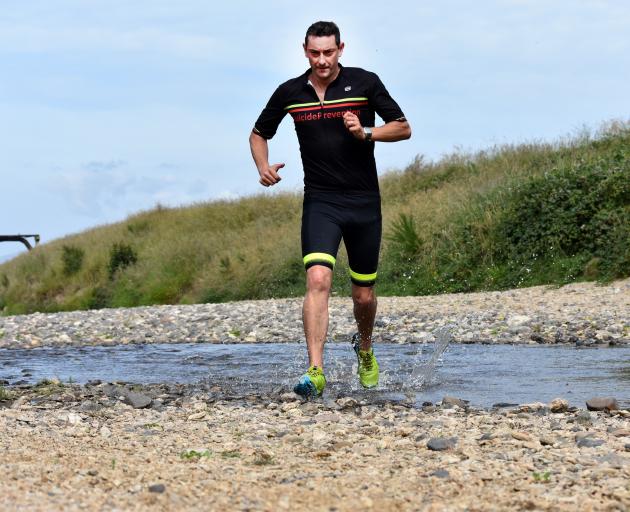 Scott Weatherall on a recent training run, in preparation for the two-day event at the Kathmandu Coast to Coast in February. By entering Weatherall is raising awareness of mental health and suicide prevention. Photo: Wayne Parsons
It might have taken 20 years but one of Brighton's favourite sons is about to embark on realising a high school dream and become part of the story of the Coast to Coast.

Scott Weatherall (38), a paramedic with St John, who splits his weekly shifts between the ambulance service in Dunedin and as a flight paramedic with Otago Regional Helicopters, first gave thought to one day competing in a Coast to Coast event when he undertook a multisport race while at King's High School in 1997.

But any further thought to participating in the multisport race was placed in limbo as front-line medical emergencies and an active role in surf life-saving, both competitively and more recently as an administrator, along with family commitments, put other demands on his time.

As a member of the Brighton Surf Club, he and brother Mark raced with distinction at national level in the inflatable rescue boats.

''Yeah, we got to some reasonable levels there,'' he fondly recalls of being national champions, representing Otago four times at interprovincial surf life-saving championships.

The skill and organisational ability that at high school resulted in his captaining the second XV carried on when he captained the Otago surf life-saving team and represented Surf Lifesaving New Zealand at four international surf life-saving conferences.

It has been his work as a paramedic and with surf life-saving that he has experienced the far-reaching effects of life-and-death situations.

It was with this in mind that Weatherall, when he decided about 18 months ago to commit to the Coast to Coast two-day event recognised it as an ideal opportunity to raise awareness of mental health issues and suicide prevention.

''I just want to get out there, complete in it, and be fit enough to enjoy it. And with the parallel aim of raising awareness around mental health and suicide prevention.''

Mental health and suicide prevention is an issue Weatherall has become passionate about and he has partnered up with Mike King's Key to Life Trust for which he has become an ambassador.

Because of this, sponsor Kathmandu subsidised his entry to compete in the 36th edition of the event beginning on Kumara Beach on Friday, February 9 and finishing at New Brighton Beach the next day.

''I'm just raising awareness that we all have physical health but are not conscious of how to take care of our mental health. I'm trying to put a message out there that we can all have some down times, but using exercise and being around positive people tends ... well absolutely helps me personally.''

When he trains he puts a visual message by putting words on his clothing and signage on his equipment to help raise awareness. Then I run a Facebook page around sharing my journey as a paramedic.

''We go to lots of people who are having a pretty tough time and that's how my motivation, and how I want to be involved in preventive measures around mental health and suicide prevention. And just open up conversations.

''Just the other day I was paddling with a guy and and he said 'what is the Key to Life Trust?' So it created a perfect opportunity. It's not in your face. It just provides the opportunity to have a conversation.''

Weatherall said men especially were the ones most at risk.

He added people should be open to supporting each other through the bad times as much as the good times, and being patient and understanding towards someone who may have fallen on tough times.

He said his experience so far indicated that it may not be the person themselves having a hard time of it, but a family member or close friend, for whom they needed assistance in helping them through

But as much as raising awareness for suicide prevention and mental health issues, it will be journey's end at New Brighton Beach in the late afternoon of Saturday, February 10, that Weatherall will personally treasure.

''It's going to be great to have my wife, brother and dad there to share to the occasion with,'' he said.