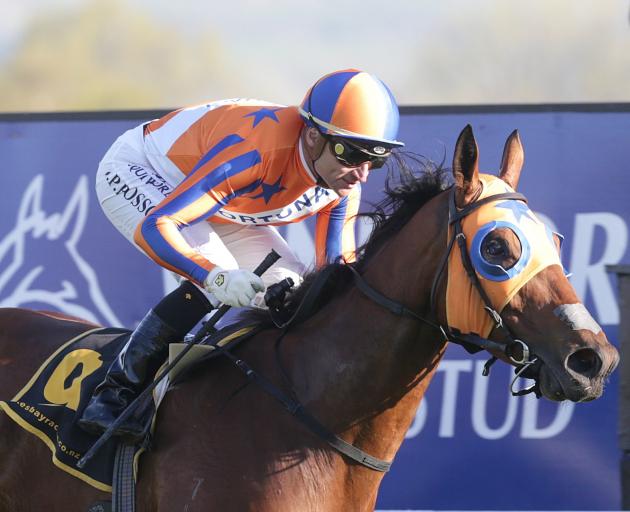 Star Matamata mare Melody Belle will contest the Futurity Stakes at Caulfield tomorrow. PHOTO: TRISH DUNELL
Leading trainer Jamie Richards is not taking anything for granted about his star mare Melody Belle attempting to pick up where she left off in Australia tomorrow.

Melody Belle will have her first start on Australian soil since she charged home from last to third in the Mackinnon Stakes at Flemington in November. She had won the Empire Rose Stakes impressively on the same track on the first day of the Melbourne Cup carnival.

The 5yr-old will contest the group 1 Futurity Stakes at Caulfield which has drawn a small field of eight.

Melody Belle arrived in Australia for the Melbourne Cup Carnival fit and ready after becoming the first horse to win the Hawke’s Bay Triple Crown.

This time the Commands mare has had just one just trial and an exhibition gallop to ready her for her assignment.

Her main rivals, Kolding, Super Seth and Golden Eagle, will each have the benefit of recent racing.

"They definitely have the advantage over us this week," trainer Jamie Richards told The New Zealand Herald.

"I think she can win and while she has been beaten fresh up last campaign, that was over 1200m, whereas I think 1400m around Caulfield is almost ideal.

"We got a good barrier draw at 3, so Opie [Bosson] should be able to keep her handy enough.

“She will race well, but, yes, she might be vulnerable a touch."

The Anthony Freedman trained 3yr-old was a good winner of the group 3 Manfred Stakes at Caulfield in the first run of his new campaign.

Kolding, who has been rated at $3.30, ran a solid fourth in the Expressway Stakes at Randwick on February 1.

Richards will also line up the favourite in tomorrow’s group 1 Haunui Farm Classic (1600m) at Otaki.

Prise De Fer will be attempting to win his sixth consecutive race.

The latest of those wins was in the Taranaki Cup at New Plymouth three weeks ago.

"We think he’s in the right sort of form and three weeks spacing is ideal."

The strength of this year’s White Robe Lodge Weight-For-Age at Wingatui will be tested in the race..

The White Robe winner, Killarney, will line up for Balcairn trainers John and Karen Parsons and rider Tina Comignaghi.