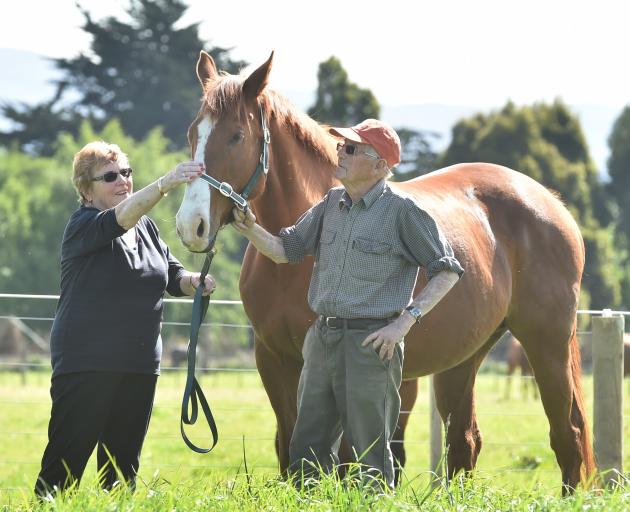 White Robe Lodge stud owners Lorraine and Brian Anderton with broodmare Ears Carol two years ago. PHOTO: PETER MCINTOSH
One of the most well-known racemares in the South has died.

"She’s probably one of the most well-known horses in Australasia over the last few years with Who Shot Thebarman, of course," Stewart said.

"He’s a bit of a folk hero and now he’s been retired.

"She’s done a great job for us, just with Who Shot Thebarman."

Who Shot Thebarman was sold privately "off the farm", sight unseen as a weanling, to the O’Leary brothers who farm near Whanganui when they rang up "out of the blue", Stewart said.

He won the Sydney Cup among other races in Australia, and earned more than $4.5 million in stakes. The horse gained something of a cult following in contesting the Melbourne Cup four times.

Ears Carol (Carolingian-Auditive) was bred by White Robe Lodge owners Brian and Lorraine Anderton. Seven of her eight named foals have been winners.

A colt out of one of Ears Carol’s daughters would be offered at the national yearling at Karaka in January "so he’ll be getting sold, the grandson of Ears Carol. So we’ve still got the breed, which is good", Stewart said.