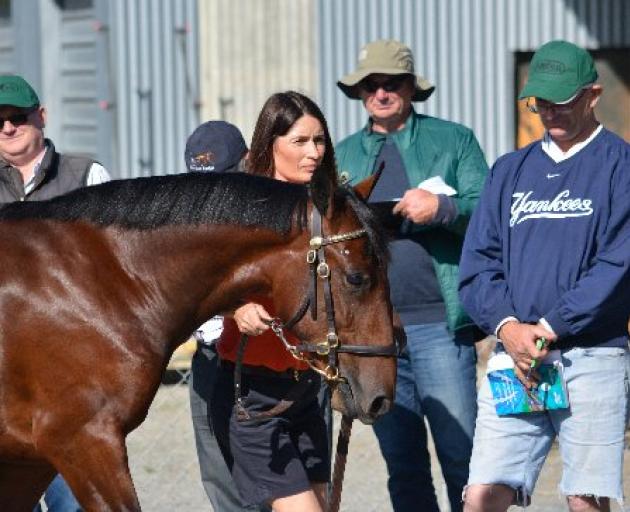 Katrina Price parades her Bettor’s Delight colt from Democrat Party at this week’s Southern Bred Southern Reared yearling sales tour. Photo: Jonny Turner
More potential buyers than ever before flocked to Otago and Southland over the past two days to inspect Southern standardbred yearlings that will go under the hammer in Christchurch next week.

All the country’s top six stables and many more had representatives run their eyes carefully over the blueblood equines on a nine-stop two-day tour that was completed yesterday.

“The southern yearlings are always presented in tip-top shape.

“Everywhere you look there is green grass — it is a breeding oasis down here. It would be the envy of most Canterbury breeders.”

Tours have been completed in Canterbury and Auckland before the sales and the strong turnout in the south was mirrored further north.

“It was great to see a great turnout and some new faces,” Reid said. “Hopefully, that translates into bids.”

Southern breeders have produced the top pacing yearlings at the Christchurch section of the national sales for the past two years.

That matched the price that Otautau breeders Dave and Dawn Kennedy's Bettor's Delight colt from Beaudiene Maja Babe was knocked down for.

In 2018, Winton breeders John and Katrina Price fetched $190,000 for their Bettor's Delight colt from Chicago Blues.

The way southern breeders banded together under the Southern Bred Southern Reared organisation helped drive success for them at the sales, Reid said.

“It has been said before, but the strength of these southerners is the way they collaborate and work together.”

New Zealand Bloodstock will host the national yearling sales for the second time since recently taking over the event.

Chief executive Andrew Seabrook hopes the strong turnout at yearling inspections will be followed by strong interest when the horses hit the sales ring.

“Everyone keeps saying this is the most people they have had on the tour ever.

“We saw some really nice horses.

“There seems to be a bit of buoyancy around. Not only judging by this tour, but by the other tours, it should be a good sale.”

“Interest from Australia is good. The success of New Zealand horses over there continues, so that has helped.

“I think we will have more Australians than last year and we have some Americans coming down, too.”