‘Super round’ gone from transtasman contest 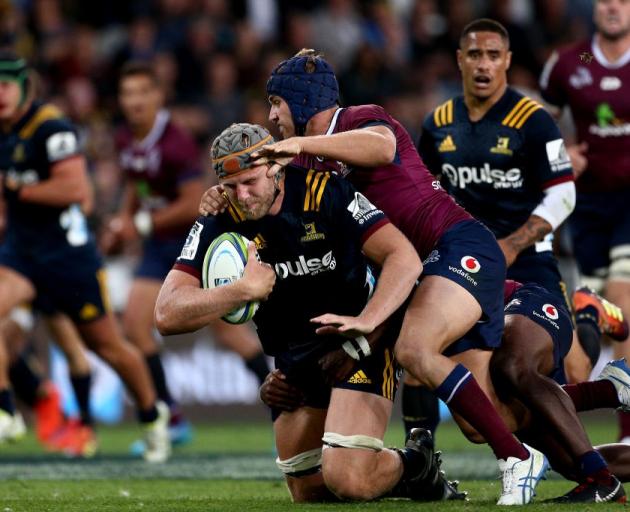 Josh Dickson is tackled in a game between the Highlanders and the Reds in 2019. Photo: Getty Images
Super Rugby’s transtasman competition is going ahead.

New Zealand Rugby said yesterday the competition would be played with slight adjustments to the original schedule, following Government approval for a travel bubble with Australia.

The Highlanders will face the Reds on May 14 as the competition begins at Forsyth Barr Stadium in Dunedin.

It will be the first of five rounds of matches, in which all five New Zealand teams will play the five Australian teams once each.

The major casualty of the original concept is the demise of the "super round".

That had been scheduled for the third round of the competition, when all five matches were to be played in Brisbane.

New venues for those games are being worked out.

"It was just too hard to contemplate basing our teams in one city," NZR head of professional rugby Chris Lendrum said.

"It’s certainly a concept we want to explore in the future.

"The super round was going to be in round 3 and we’re just working on the venues for the round 3 fixtures and we’ll announce those in due course.

"We’re going to have a scenario where some teams now have three home games and some teams have two, but we’re encouraging the clubs who are due to play each other that weekend to have a commercial discussion about how the proceeds of the game are shared.

"We’re trying to get some evenness through the competition."

The Highlanders may also be impacted by Western Australia’s refusal to let New Zealanders into the state without quarantining, or spending 14 days elsewhere in Australia.

It could potentially affect their game against the Western Force in Perth on May 21.

Lendrum said they were developing contingency plans should the travel bubble between Australia and Aotearoa burst during the tournament.

"We’re hoping that a six-week tournament will go off without a hitch.

"It’s possible it might not, but the beauty of the competition start date, which is still over a month away, is we get to see the bubble open, we get to learn a lot over the first few weeks and that will inform our contingency planning ...

"There are two really strong Australian teams lurking on the other side in the Reds and Brumbies, and we know our teams will be looking forward to testing [themselves] against them." — additional reporting RNZ